Prostitution is said by the many to be the oldest profession of our humankind. This is a rare truth coming out of times of great antiquity; tens of thousands of years back.

Setting aside many surviving physical artifacts of prostitution such as coming out of Pompeii over much too near Mt. Vesuvius, earliest written accounts of prostitution are found in a fictional work, the Bible. Earliest biblical account is in Genesis, a fabricated story of Lilith, first wife of Adam. The Christian god makes her a sex slave to Adam. This is a recording of God being the first to engage in a crime of human trafficking.

Lilith is made a sex slave toy for Adam. She fiercely objects to being sexually abused by Adam and his daddy, God. Lilith is mistreated and punished but does eventually escape from her godly brothel called "Paradise". She flees to the shores of the Red Sea. God promptly sends an army of angels after Lilith to torture Lilith and kill her children. God sees to this her life is a living hell. 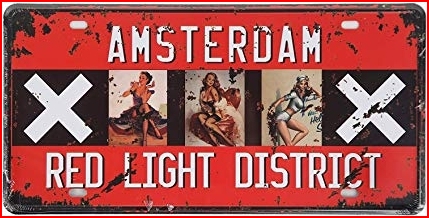 Back in 1830 year prostitution becomes formally legal but this is as fickle as hookers; Christians keep screwing around with Netherlands laws. 1988, the Netherlands government recognizes prostitution as a lawful profession. A decade later, 2000 year, laws are rewritten and given some teeth. Prostitution is made a lawfully recognized business requiring a local municipal license and subject to regulations written to help protect prostitutes from abuse. Primary goal of those legal efforts is to squash human trafficking and usage of minors. 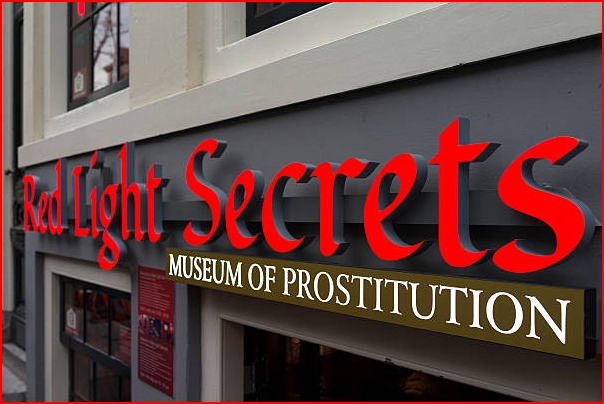 Since turn of the twenty-first century, since 2000 year, many minor laws and regulations are passed to further protect sex workers. Amsterdam is quite aggressive and a leader in shaping and writing laws in response to secrets shared by prostitutes about what is really going on out in reality. 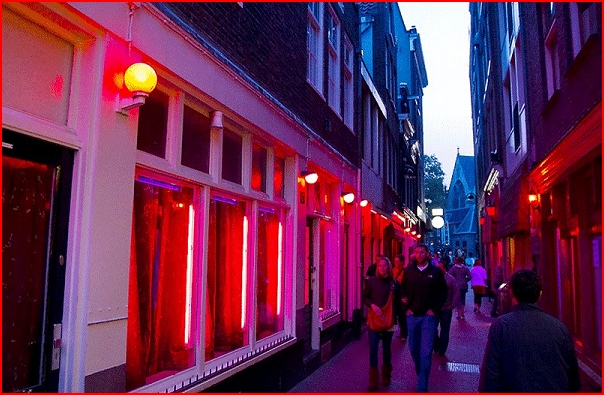 Brothels in Amsterdam are structured like hotels; many rooms facing out to streets. Each girl can rent or lease a room and go into business. Prostitution is not a problem, this is warmly accepted by the Dutch. A serious problem comes about with ownership of those buildings. International organized crime swoops in and buys those "hotels". 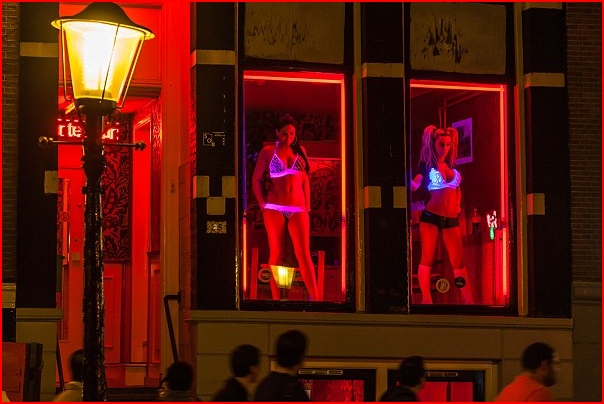 A working girl rents a brothel hotel room with a large window facing the public. She stands, sits, lies, dances and otherwise entices customers who actually see what they are buying. Without a hotel room, hooking is difficult or simply not possible.

Amsterdam does not allow street walking to protect both working girls and the public. Some girls can work from home, nightclubs and similar but their exposure to the clients is severely limited. Those glass wall hotel rooms are a must if to survive this business.

Organized crime comes in, buys those hotels then begins strong-arming and coercing those girls into paying outrageous rental fees. A more serious problem comes about. Those mafia like owners use those hotels as fronts for human trafficking and sexually selling underage girls and boys.

An ingenious solution comes about which I will discuss in a bit. 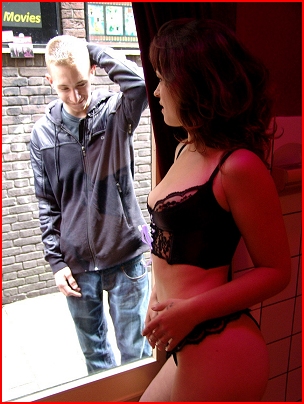 A notion which messes with minds of American Christians is families live in Amsterdam, some within the Red Light District. Entire families, kids and all. They are just as normal of families as ours here in our nation. Parents raise their children right, school buses come around for those kids, they attend school just like our kids.

Children come and go through this Red Light District attending school and playing with their friends. Many kids make friends of those prostitutes. Those school kids stop at windows of favorite hookers to greet and goof around. Kids see those girls as friends not as whores. Heck, might even go inside a room to spend time with momma.

Some mothers are working girls out of economic need. Have to admire those wives and mothers for doing whatever this takes to provide for their families.

Christians get all butt-squirmy self-righteous, "Your momma is a whore!" Ah geez, what a horrible thing to say to a child. Those working moms are not whores, they are good mothers struggling to provide decent and healthy lives for their children.

Those arrogant Christians believe their culture is the only right way to live. They are also direly ignorant, laughably so. Within many Nordic cultures, like the Netherlands, prostitution is accepted and encouraged. This is an honest way to earn a living.

Currently, prostitution in Amsterdam alone generates a hundred-million American bucks in annual revenues. All told across Europe, this is easily a billion dollar a year business. 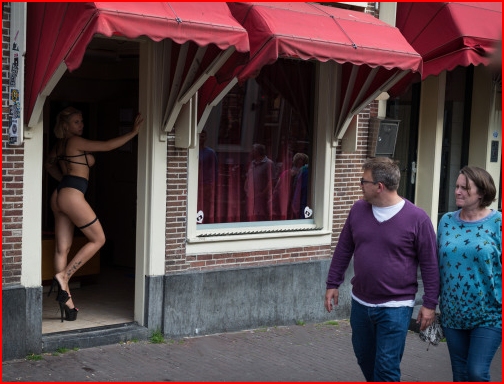 Boys, pay attention here, stop staring at and drooling over my photos. When you and wife are visiting Amsterdam don't let your wife catch you messing with working girls. Darn, play this smart. As a treat, make an appointment for your wife to go down to first floor of your hotel to enjoy a sauna, massage, facial and hair styling. This will take several hours giving you several hours to enjoy your own beauty treatment!

Hey! Give sincere attention here. Your wife will never know unless you tell her which would be stunningly stupid. You are on European vacation. You are not cheating, you are not falling in love with a girl half your age, you are simply getting your rocks off which is purely physical. This is no threat to your marriage while you keep your mouth shut. This is a vacation not a test of your never-ending love for your wife.

Maybe hire a young handsome boy hooker for your wife. She likely would love this. Then she will be accepting of your playing in the Red Light District! Families which play together stay together. 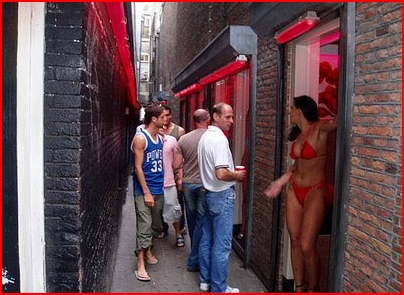 Should a working girl feel comfortable with a potential client she will open a security door partway to talk. If things go south, she can slam shut and lock this door. Local police on motorcycles are quick to respond if needed. Police department in Amsterdam aggressively protects those girls. This protection is almost never needed. 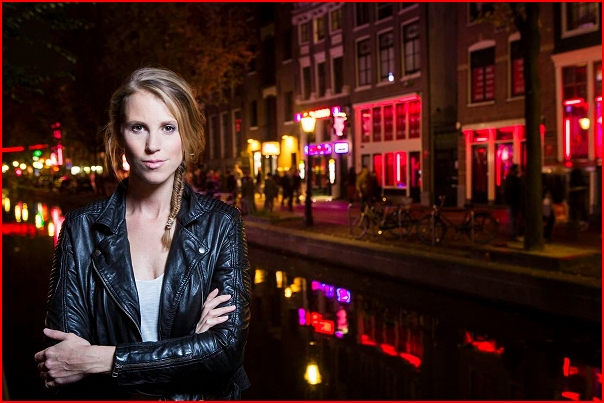 I mention an ingenious plan to deal with organized crime and human trafficking. Gosh, if only American elected leaders could be so smart.

Couple years back working girl leaders meet with former mayor of Amsterdam, Job Cohen. He is a good man, a good thinker. Working together they kick out organized crime owners of those brothel hotels. City of Amsterdam "force buys" those hotels and takeover. There is a twist, the city is only the owner and not the regulator. Working girls of each hotel meet, organize and create a business plan which benefits and protects working girls. The city owns the building, the girls operate the business.

This is smart thinking. Government stays out of this and working girls are successful. There is still much to address but improvements are ongoing to have the Red Light District a safer and more enjoyable place for Amsterdam girls to earn a living. 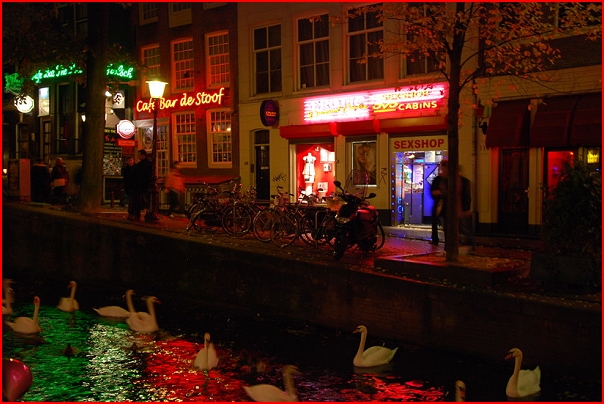 Amsterdam is a beautiful city and a favorite of tourists. There is much to do besides enjoy exotic sex. Amsterdam offers tours, coffee shops, clothing stores, nightclubs, stage acts and more. They even have lovely swans in their canals.

An amusing note is this hardy nature and common sense of the Nordic. Those canals which flow through Amsterdam have no safety barriers between sidewalks and canals. You can walk right off a sidewalk and splashdown amongst swans. An eye catcher is there are twice as many bicycles in Amsterdam than people living there. 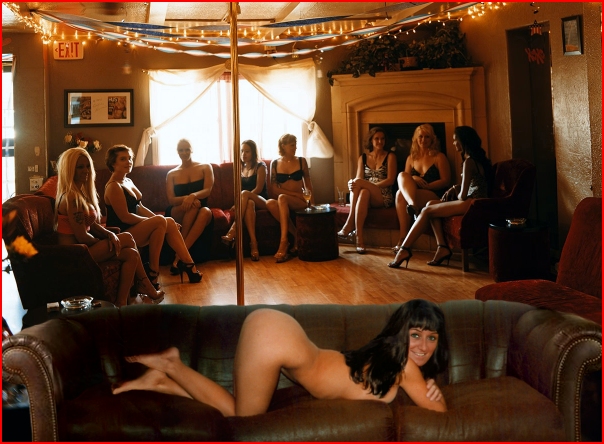 Disclosure: I am biased! Each year our girl and I haul her cowboy daddy up to Reno, Nevada for adult fun. Saturday evening, we taxicab fifteen minutes down to the Moonlite Bunny Ranch owned by recently departed Dennis Hof. What a way for a boy to die, in a brothel!

Our rule is when working girls come out for picking, our daughter and l get to pick a girl for him! We meet in a private room to negotiate a price, usually five-hundred for a half hour but we go for an hour at a thousand. Part of this fee is the two of girls are allowed to watch and, perhaps, participate in our own ways. Working girls are a blast, especially for this cowboy husband of ours!

My disclosure is to give Christians something about which to scream and shake their fists. I don't want those good folks to feel left out in a cold canal and pecking swans.