This is a verbatim transcript which resides in public domain. This sermon is directed specifically at our daughter and me.

----
Okpulot, then let me give you truth--this is not a taunt. I have remained civil with you while you have insulted me using your American Indian superiority and indignation as the basis for your insults. Now, I will set aside for a moment the decorum and civility of my western world upbringing and set the record straight.

You sit upon your lofty perch, believing that your perspective on issues is pragmatic and sagacious due to your Indian worldview but fail to see that your perspective is actually limited and narrow, for your perch is in a dimly lit hallway and the doors are all closed. You have been given grace and great forbearance by those whom you've insulted--myself included--because we've been taught that your people have been oppressed and mistreated by our progenitors. Therefore I've remained silent. No more.

When my Western Christian ancestors arrived to this continent--with all their faults and all their mistakes--they, nevertheless, found a people who were still living in the stone age. They arrived on ships engineered to cross the vast oceans. You were still hallowing out logs with stones or sewing canoes out of sticks and skins. Okpulot, my western civilization was millennia ahead of yours. While your people were living in homes that appeared like a Cub Scout had built a campfire and forgotten to light it, we were building the Parthenon, Coliseum, Notre Dame and the Vatican (and I‘m not even Catholic). While Beethoven, Bach and Mozart were composing symphonies and piano sonatas, your people were beating on drums and playing wooden flutes. While your people were telling stories about the water bug and the turtle mine were writing treatises on Aristotlean logic, Euclidean geometry, algebra, trigonometry and advanced calculus. Now, granted, some of those Indian tales must be pretty cool to hear when you've smoked a few bowls or eaten some peyote mushrooms (I really wouldn't know), but it doesn't appear to me that society had much advance on that body of knowledge. Thankfully us pale-faces came along and taught you an alphabet so that you could begin to record your history. 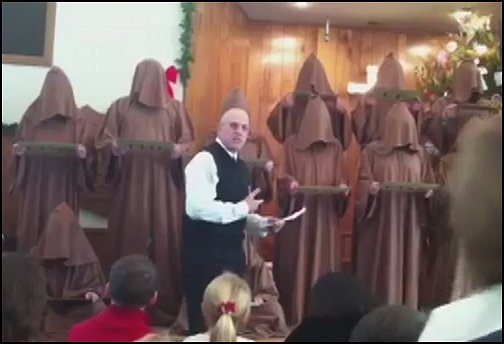 There are two important topics. This proves difficult for me to decide which to discuss. An obvious topic is this preacher man's offensive arrogance and his dire ignorance of end results of all those "advancements" of white man. Over two-thousand years Christians suffer upon all peoples endless misery, destruction, brutality, death, war and genocide. Today all of Mother Nature suffers devastation, extinction, pollutants and deadly toxins. Our natural world is dying. These are end results of those advancements.

Other topic is this lethal arrogance of faith. This is my chosen topic. 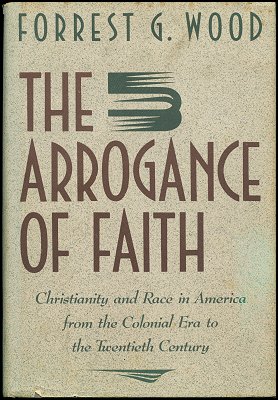 During my English professor career this book, "The Arrogance Of Faith" written by Forrest G. Wood, is the most extensively researched and details documented writing I have come across. At five-hundred-thirteen pages this book is purely academic. Wood does not write opinion nor fiction. His writings are hard facts with each sentence and paragraph supported by elaborate notes and bibliography. His book is not light reading, his book is a heavy duty research source for university students and professors alike.

Discussion of his research spans three-hundred-eighty-four pages. Wood systematically traces and delineates development of and history of Christian masculine sexism and Christian racism. He first introduces readers to Christian myopia, ignorance and a self-righteous mind set which allows for slavery, brutality, war and genocide.

After this introduction Wood begins a long and detailed accounting of those devastating impacts, often fatal impacts, of Christianity in America from the early Colonial Era up to recent times. He links together biblical doctrine, Christian thinking and historically well documented events. Wood writes harsh truth which is independently verifiable.

A sample passage from a chapter titled "The Curse".
----
A claim that God had placed a curse on a group has always been a convenient device for subjugating alien peoples. Colonial depredations against Indians were often based on the assumption that the natives, with their red skin color, were agents of Satan whose red coloring and association with fire had been one of the popular mythologies of medieval Europe. Thus it was easy for John Winthrop, the first great Puritan leader of Massachusetts Bay, to believe that the smallpox epidemic that had decimated Indian villages in 1616-18 was simply God's way of "thinning out" the heathen aboriginal population in order to facilitate the later English migration.
---- 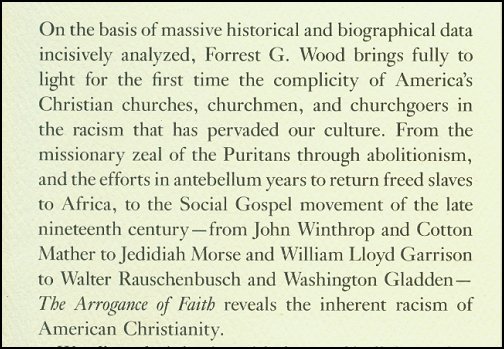 A portion of a book jacket blurb which exemplifies Wood well researches and discusses virtually every aspect of Christianity in America from early Colonial Era forward. Names listed in this blurb are almost never read nor spoken of; lost to obscurity of centuries. This author slowly step-by-step walks a reader along a historical timeline. 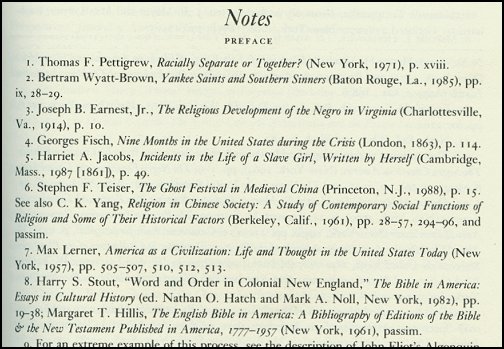 Notes for each chapter span about a hundred pages. If this fine print were expanded into full size text, this would make for a two-hundred page book. His notes are precise, detailed and make for excellent research sources. All which Wood writes is carefully documented, fact checked and verified truth. His book is an academic work of art. 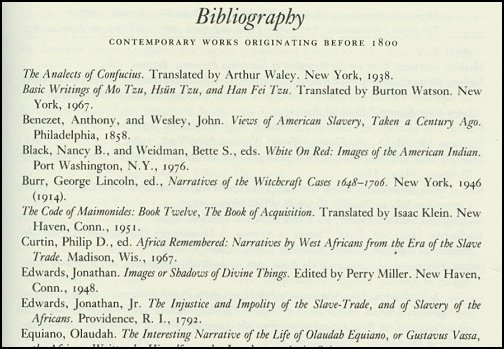 Wood provides a thirty page unique bibliography of works cited or discussed dating back before 1800 year. This enables researchers to find centuries old writings reaching back to those days when Puritans first came ashore. Wood covers all from day one to current time. His research is exhaustive and impressive. His book is widely acclaimed around our world as the ultimate research source for understanding this spread of abhorrent Christian masculine sexism and Christian racism. This knowledge helps readers make sense of Christian sponsored black slavery and the four-hundred year long Christian genocide against Indians.

Periodically, enraged Christians impotently try to discount this Wood book but they cannot. All he writes is supported by well documented historical truth. What Christians fear the most is truth. 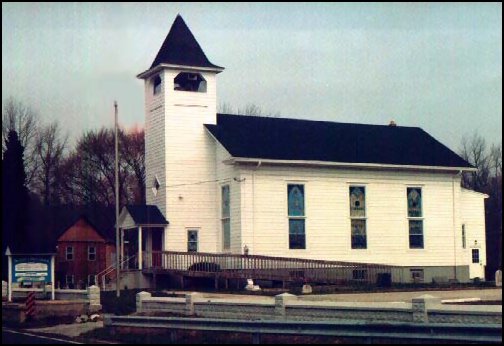 Our daughter and I only need to suggest our Indian peoples are better at survival and smarter than Christians to send the preacher man flying off into a raging Christian racist rant right there in public. The boy made an arrogant jackass of himself for all to witness.

No black skin nor brown skin, not even yellow skin nor red skin people can be smarter than white Christians because God says so.

His ravings well exemplify this myopic and ignorant viewpoint of most Christians. This preacher man is blind to reality, he is unaware for two-thousand years Christianity is inflicting misery and suffering upon all peoples. The preacher man cannot see this is technological advancements which are rendering our earth into a toxic wasteland.

Although our Indian peoples have been around well over ten-thousand years, the preacher man is right because God is on his side.

"What Christians fear the most is truth" - Taha