Andy Warhol and Robert Crumb are two of the most powerful and most influential artists of the Sixties. Warhol is famed for his Campbell soup can style "pop art". Crumb is the cartoon creator of Fritz the Cat and is famed for his personifying animals into humans. Andy Warhol is well known, Robert Crumb is not well known. Nonetheless, Crumb is a more talented and a more prolific artist than is Warhol. 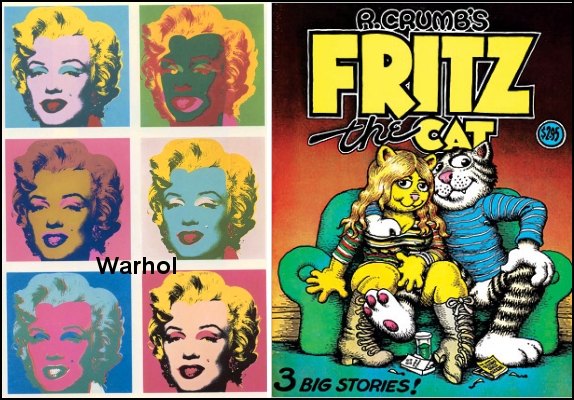 Warhol and Crumb influence appears in many artworks and styles of hundreds of illustrators and artists of the Sixties some of whom enjoy their own brand of fame.

This artist, Mel Ramos, is close to ten years younger than Warhol and is clearly touched by this pop art style of Warhol. Ramos produces a lot of art using ordinary but larger-than-life things of life, Warhol style. Ramos art centers on my items, candy bars, ears of corn, bananas, cigars, cigarettes and many other usually unnoticed bits and pieces of everyday life. Ramos paints beautiful girls with those oddball objects as props. His girls are typically scantily dressed or simply nude.

Sixties fashions and behaviors are displayed in this artwork of Ramos. Amusing for nudist me is girls of Ramos most often display tan lines with emphasis on bikini bottom color contrasts. Ramos portrays his girls with hair above and below which remains fashionable during the Sixties. Most noticeable is when Ramos girls are wearing clothes their fashions are distinctly Sixties.

Most admired and best known fringe work of Ramos is a beautiful Marilyn Monroe viewed through an old fashion door keyhole; a Peeping Tom theme. 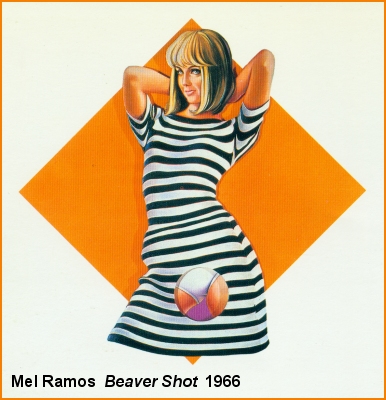 "I have always painted women. I have drawings from when I was four of stick figures with breasts and my drawings from age nine were filled with sketches of women in nineteen-fifties ball gowns."

Berardinis is exceptional, she is not influenced by Warhol nor Crumb. However, she is fiercely influenced by famously infamous nudie cheesecake Bettie Page. Portfolio of Olivia includes dozens of lovely renditions of Bettie. This makes sense, during childhood and teenage years of Berardinis she is raised on an artistic diet of Bettie Page.

Olivia Berardinis is out over the fringe edge in subtle and delightful ways. Her talented quirk is partially hiding subtle sexual inferences. Her artwork displayed below on your left, deep pink slip, requires a bit of thinking to realize her message. Those oversize ribbon bows on sides of her stockings send a message this girl is not planning to add more clothes; those would not fit over those pretty bows. 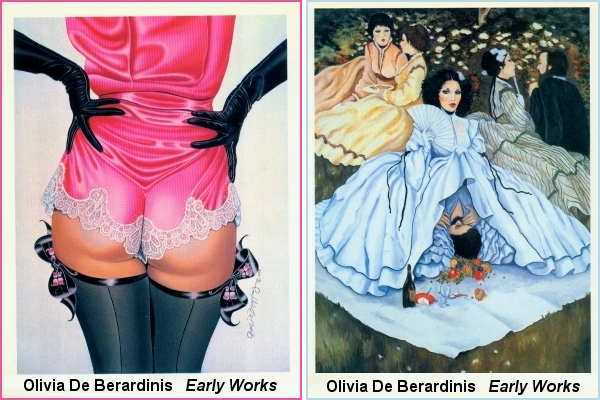 On your right, Olivia displays artistic talent of Renaissance Rembrandt but there is a twist. This classic nineteenth century picnic is sensuously naughty. An art admirer believes to have figured out this humorous message. However, there is a more subtle notion. This person enjoying a tasty picnic treat, is this a girl or a boy? Looking at hair styles of those other girls and comparing, this is impossible to discover gender.

A slide show of some Olivia Berardinis artworks:

This artist shows signs of being guided by both Andy Warhol and Robert Crumb. Kanarek uses pop art formats of Warhol and exaggerated details of Crumb.

Michael Kanarek earns a living as a commercial illustrator. He creates many album covers specifically for heavy metal rock bands. Kanarek is also featured in magazines such as "Screw" and "National Lampoon". He creates many movie posters both mainstream and twisted up a bit, along with producing some comic strips.

Favorite subjects of this artist are sexual escapades and experiences of teenagers same as you and I and the rest of the crowd enjoyed or, suffered. Quite awkward!

Look close at those shoes. Michael Kanarek is poking fun at a century old myth of teenage boys. This silly belief is a boy can spit shine toes of his shoes to be like mirrors so he can stand, look down and see right up a girl's skirt, see what he so madly wants but almost never attains because he simply does not know how! In this sense, Kanarek is an artistic humorist; pokes fun at our fringe human behaviors.

"I think I am like compelled to do this stuff to a certain extent... I sit down with a pencil, which is very often, I end up drawing naked women." 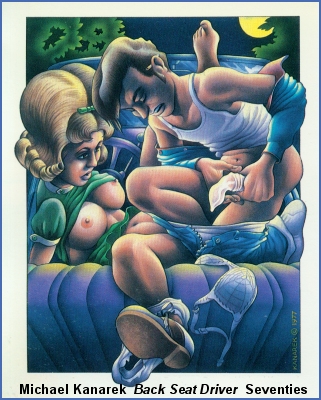 Must watch tribute to Michael Kanarek:

About ten years younger than Robert Crumb, this artist is powerfully affected by Crumb. His street corner two cats are clearly in a style of Fritz the Cat, and a spoof on our American society - "X-ray Vision" glasses popular for decades and most often advertised within pages of comic books. Every young boy's fringe dream, seeing what is taboo without being caught!

Other artwork is a hilarious masterpiece. Grandpa is suffering a heart attack and grandma is going thermal-nuclear ballistic! Their house cat is enjoying snickering laughter. Cats are ornery this way. Do you see a founding father of America? This art is a reflection upon Sixties social upheaval and a redefining of our notion of obscenity. 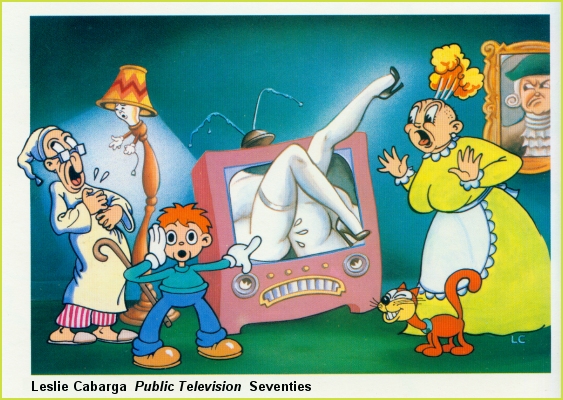 "I like the idealized versions of people portrayed in movies, magazines and advertising, especially in the 1940's and 50's. Very dramatic, beautiful and specific. Tura Satana popped up when I was invited to participate in an art show celebrating the movies of Russ Meyer."

Tura Satana is the star of "Faster, Pussycat! Kill! Kill!" which is a grade B sex exploitation movie of long back. Satana enjoys a worldwide fanatical fringe cult following including the three of us in our family! Almost all movies of Tura Satana are mocking sexual innuendo spoofs upon our uptight American society.

Dale Sizer is a more calm and emotionally sensitive Olivia Berardinis. He specializes in girls and Hollywood starlets of the forties. Dale depicts his ladies as classy and smoking cigarettes beneath big heavyhearted eyes often shedding crocodile tears.

His fringe quirks are fascinating. Most of his girls display obvious nipples under thin almost transparent clothing. Other quirk is Sizer often "dusts" his paintings with glittering sparkles which are subtle, a "glitzy" effect in art.

I have myself convinced Dale Sizer produced his "I Am A Female Smut Writer" artwork just for me! Amongst my writing specialties is romantic smut littered with moral questioning, especially issues of nudity and age of consent. Quite the bit of fate, my primary story characters are a blonde headed girl, a raven haired girl and a cowboy, much like this Sizer artwork.

Many of you readers are aware I frequently toss out sexuality issues which cause many moral discomfort - a questioning of personal moral values with anxiety. Reality is this is a cultural issue: American Indian compared to mainstream American society. 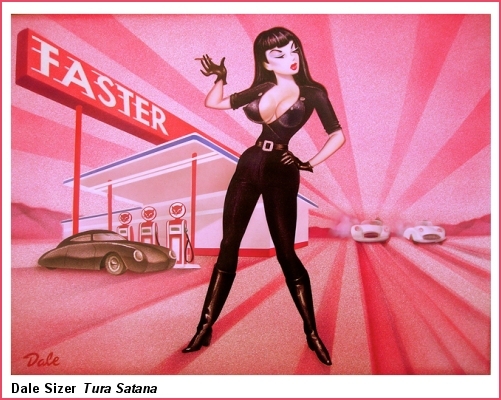 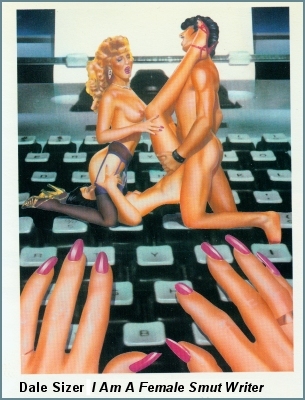 A common theme to Andy Warhol, Robert Crumb, artists I discuss and hundreds of other artists of the Sixties era is social revolution. Those artists touch upon issues of nudity, sexuality and societal mores. Almost all approach mainstream American culture with mocking sarcasm. Theirs is a revolt against centuries of American puritanical thinking. Our Sixties era is a time of significant societal upheaval and artists of the era provide visual depictions of counterculture thinking leading to much moral questioning.