The "Sixties" spans a period of time roughly from 1955 to 1975 years. As you readers know this is an era of the most widespread and fierce societal upheaval. Changes in societal thinking because of the Sixties continue to ripple down through time.

Almost all changes are related to how people view our world especially civil rights, freedom of speech and warfare. A myth is Baby Boomers of the Sixties become sexual wild animals. This is not quite true, number of physical acts of sex noticeably drop. This might be related to fierce feminism and women saying "No!" and boys actually understanding what this word means.

This essay is a companion piece to my Bare Butt Band within which I write,

"My expectation is you will find a Blind Faith album cover which started up a firestorm of controversy and severe censorship even today."

Seidemann decides a young girl holding a futuristic rocket ship will well symbolize this band name, "Blind Faith". This is the turbulent Sixties, band members are fresh out of "Traffic" and "Cream" bands who are known not for producing protest songs rather for their talent at reflecting upon this dire danger of complacency with government and society.

An image of a nude naively innocent young girl holding an uncertain future in her hands is needed.

Seidemann, riding an "underground carriage" or "subway" here in America, sees a young girl wearing a school uniform board his car. She seems a perfect model for Blind Faith. Her name is "Sula Goschen". She is twelve years old. Seidemann talks with her and presents her with his business card. Parents, Angela and David Goschen, meet with Seidemann, those parents eagerly consent to this photography work.

During this meeting Seidemann decides Sula looks too old and too mature for his cover work. Her younger sister, eleven year old Mariora Goschen, is offered this modeling job with an 40 British pound payment which is a handsome handful of money; about $800 American bucks today when adjusted for inflation. Mariora decides payment will be a "young horse", a foal.

1994 year, in her thirties, Sunday Times of London interviews Mariora:

"The nudity didn't bother me. I hardly noticed I had breasts. Life was far too hectic. I was mad about animals and much taken up with family and friends. But now, when people tell me they can remember what they were doing when they first saw the cover, and the effect it had on them, I'm thrilled to bits." Mariora adds with a grin, "By the way, I'm still waiting for Eric Clapton to ring me about the horse." 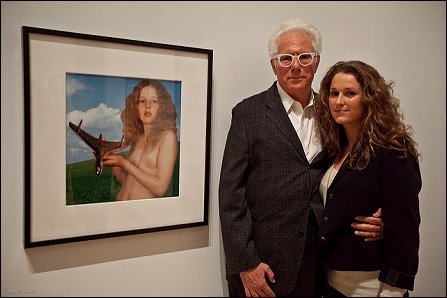 Over in Europe this album cover is well accepted, only a few complaints here and there. On our side of the Big Pond, American heartland Christians become enraged and complain, threaten to have their god rain down fire and brimstone upon our nation. Album cover is changed to accommodate self-righteous dictates of American Christians.

No, I will not touch this firestorm issue of the Scorpions' "Virgin Killer" album cover. This is too hot to handle and Christians would form a torch waving, pitchfork shaking angry mob to hunt me down for a burning at the stake.