To please and pacify white Christians on the day after Christmas, 1862 year, President Abraham Lincoln gives a gift to them, the hanging to death of thirty-eight Sioux fathers, brothers and sons. Upon executioner axe chopping a release rope, scaffolding falls away and some necks are snapped and hangman nooses choke to death others. Thousands of good Christians applaud, cheer and go crazy with delight at such a sight of redskins being murdered by an American president in such a great number. 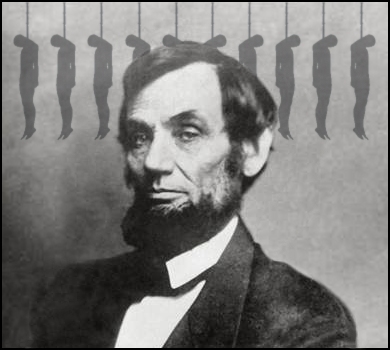 Hangman ropes fail to kill a few. American soldiers promptly hang survivors again. Those thousands of God fearing faithful roar with excited enthusiasm and glee. This violates an age old timeless tradition: if a person survives a hanging, he is to be set free because angels intervened. However, not if this person is a filthy injun.

Once all those Sioux fathers, brothers and sons are good and dead, hanging ropes are sliced into short lengths then handed out to grinning Christians as souvenirs to take home to display to children and brag about. Each souvenir length symbolizes a vote earned by Abraham Lincoln. True reason Lincoln savagely murders those Sioux is not for justice rather to win over voters of Minnesota for his pending presidential election. 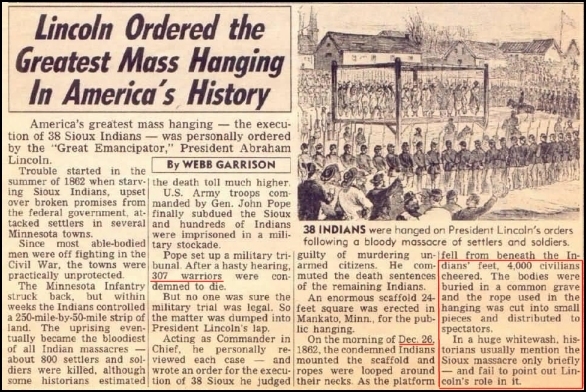 After several centuries of genocide, Christian Americans have mercilessly butchered and slaughtered over twenty-million Indians, death marched those tribes still alive then imprisoned them within concentration camps called reservations to be slowly starved to death if not frozen to death first. Santee Sioux and Dakota Sioux are at-gunpoint imprisoned within a strip of land barely twenty miles wide and stripped to barren by Christians; nothing left alive not even insects except cutworms which eat Sioux crops faster than can be grown.

Sioux cannot feed themselves, hunting grounds are decimated and gone, government promised shelter, food and clothes are denied. Those good peoples of Minnesota and Abe Lincoln begin a campaign of starving to death and freezing to death all Sioux tribes and this is successful; thousands of Sioux children and their parents slowly and horrifically die.

Desperate to save their tribes, to save their children, Sioux write letters to the governor of Minnesota and to President Lincoln. Sioux beg for unlocking of government warehouses then food and supplies promised to the Sioux be distributed. Sioux send representatives to in-person beg for help, to beg for food and survival needs. Minnesota and Lincoln are repeatedly warned by the Sioux if promises of food, blankets, clothing and shelter are not kept, war will breakout.

Good Christians of Minnesota and Lincoln ignore pleadings of the Sioux and their tribes continue to torturously and slowly starve to death and freeze to death. War comes about as warned.

Those government propaganda printing presses, mainstream newspapers, never touch upon those truths of Christians, government and President Abraham Lincoln actively engaging in a war of horrifying genocide against all American Indian tribes from east coast to west coast, from Mexico to Canada. Lincoln does not seek justice, he seeks votes by slaughtering the Sioux. 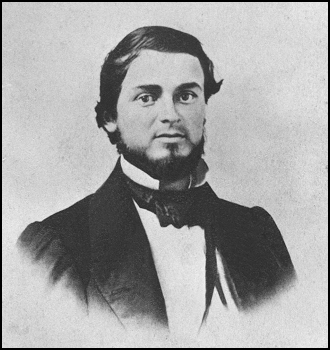 Ironically a man of God ignites this deceitfully labeled "Dakota War". He is Andrew Myrick who is a government agent operating two Indian "trading posts". Congress sends him freshly minted gold coins to distribute to Sioux to pay for supplies, and Congress sends him trainloads of food, blankets, farming needs and other supplies to distribute to Sioux tribes.

Equally ironic Myrick is married to a Dakota Sioux woman.

For years Myrick skims off Sioux gold coins and stuffs his pockets full. Myrick, being an honest Christian man, also out-the-backdoor sells Sioux warehoused supplies to local equally honest community Christians who well know they are stealing food from mouths of Sioux children who are starving to death and freezing to death.

No surprise thousands of Christian town folks cheer and applaud Lincoln's mass hanging, all those Sioux witnesses to their crimes against humanity are eliminated and exterminated with certain cruelty.

Sioux tribes send leaders to meet with Andrew Myrick. Those Sioux chiefs and elders plead with Myrick to release their Sioux money and supplies, "We are starving to death, we are freezing to death." White boy Andy is not motivated, he has all the gold, he has all the supplies, his pockets are lined with heavenly golden fleece and God is on his side. Andrew Myrick tells the Sioux through an interpreter, "So far as I am concerned, if they are hungry let them eat grass or their own shit." Upon interpretation Sioux are angry and let loose war whoops and honor trills.

Tribes are angry, Sioux begin raiding farms, towns and warehouses for food, blankets and other supplies needed to survive their harsh reservation conditions. Few days later Myrick is found dead. He is porcupined with Sioux arrows and his mouth is stuffed full of grass. Rumor is his pants are full of his own excrement. 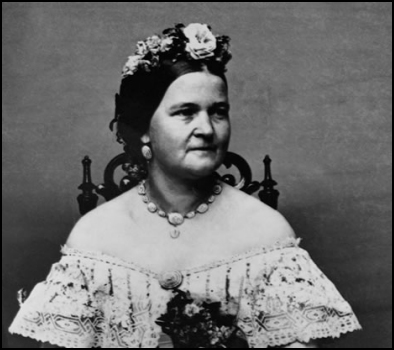 There are other problems. Abe's arrogant elitist wife, Mary, is constantly remodeling and furnishing their big white house on a hill. She spends more money than available to Congress. This money promised to the Sioux is diverted to pay for Mary's new curtains, carpet, chairs and china for her eloquent dinner table. Certainly would be inappropriate for good Christian Mary to starve or to freeze; she is America's gracious First Lady. Abraham Lincoln assigns General John Pope with a task to wage a genocidal war upon Sioux and other tribes of Minnesota and region. Pope is known for his barbaric savagery fighting the South. John Pope tells Lincoln, "It is my purpose to utterly exterminate the Sioux. They are to be treated as maniacs or wild beasts, and by no means as people with whom treaties or compromise can be made."

This does not take long for murderous Pope to win his "war" on the Sioux. He butchers and slaughters thousands of Indians, men, women and children alike, Sioux or not. Thousands more are rounded up then herded into military fort stockades whereupon those victims of Pope are starved to death, frozen to death and routinely beaten, whipped and shot by American soldiers. On a daily and nightly basis Indian woman and young Indian girls are raped by soldiers who are hypocritically assigned to guard and keep safe those Indian peoples.

John Pope and subordinates line up Indians to be put on trial for theft, rape and murder during the Sioux uprising to desperately stay alive. Marched through a military tribunal courtroom and before a twenty-two year old judge pro tem who knows nothing about law, each trial lasts about five minutes. No defense is mounted, no arguments nor viable evidence presented, these trials are simply a formality. An Indian says his name, this child of a judge pronounces him guilty and sentences the Sioux to death by hanging. 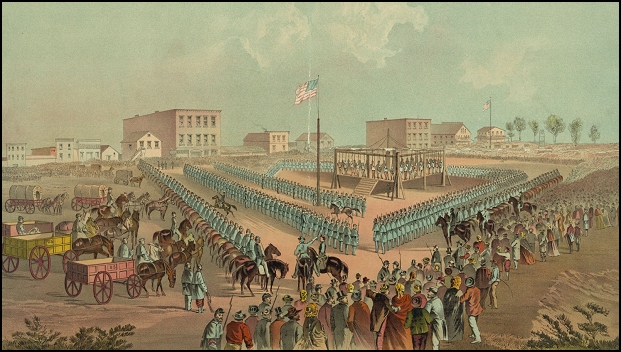 A few days John Pope and Abraham Lincoln have themselves a list of three-hundred and three Santee Sioux to execute. Some of Lincoln's cabinet members advise him to publically kill so many Indians would be bad publicity, nationally and internationally, but Lincoln must murder some to satiate red blood thirst of good Christians of Minnesota. Abraham Lincoln, over fierce objections of General Pope, pares down this list to thirty-nine Sioux to hang to have those of Minnesota vote for him as a second term president.

On execution day, still unexplained, one Sioux man is provided an acquittal. Thirty-eight Sioux are garrison marched to their mass gallows. All those Sioux walk straight and proud, most begin singing their traditional death song to honor their tribe and ancestors. On gallows, hangman's noose about neck, Sioux men cry out their names and pridefully add, "I am here! I am here!"

This macabre spot genocide finished, short lengths of hanging rope are cut and souvenir given to God's good children who gathered by the thousands to celebrate this mass murder of Sioux.

Those Sioux not hanged to death are sentenced to life in military prisons with off-the-record orders issued to American soldiers to torture to death their prisoners. Our proud soldiers do just such. Those thousands of Indian families locked inside fort stockades are systematically starved to death and frozen to death. Only a handful of Sioux survive these horrific events. Those still alive are mixed in with other rounded up tribes then death marched westward to lethally desolate concentration camps: reservations.

Government, soldiers and Christians are relieved, virtually all Sioux witnesses to their crimes against humanity are eliminated and exterminated. Truth, though, has a way of escaping and becoming known. A harsh truth is President Abraham Lincoln is a murderous madman.

Click To Learn Truth: "The American Indian And The Great Emancipator"