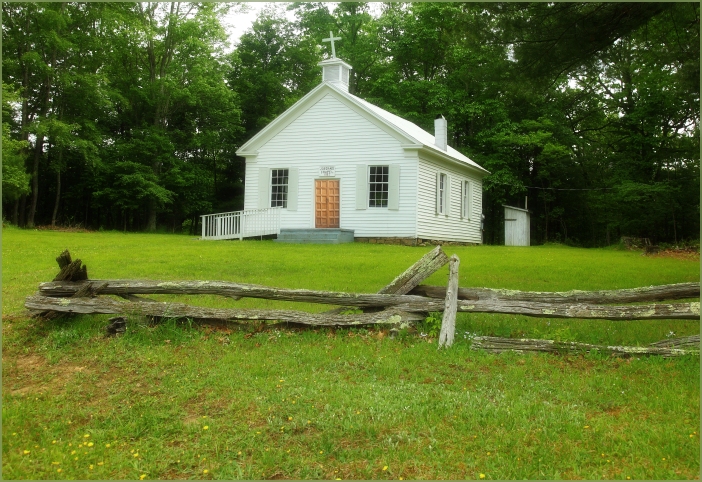 We are young kids not much taller than a mule's butt and think ourselves seasoned mule skinners. Weather is hot and humid, typical of a southeastern Oklahoma summer day, hundred degrees and fixing to rain. Despite all this sweat dripping humidity, dust is kicking up around our dirty callused bare feet while we walk north on our old dirt and gravel route. This dust mixes with our sweat turning us and our clothes a stained creamy brown, especially our feet. We are typical farm kids looking for adventure on a typical blistering hot soggy day. We find adventure, sure enough, but not an adventure we expect.

We are about even with Church House Hill where the white folks' church piously stands surrounded by a whiskers thick pine forest there a little south of Eagletown just before those old rusty railroad tracks with a crooked leaning over railway crossing sign. My uncle clobbered this sign with his '52 Chevy sedan while taking a sip of white lightning from a fruit jar to warm his feet for Saturday night dancing across the Line down in Texas. He tells me, "Those dance hall girls don't much cotton to a boy with cold feet."

This church up there on a hill is pretty enough, clapboard painted white, green trimmed windows, a proud steeple with a cockeyed cross on top. There are poured concrete steps well polished by city slicker shoes leading up to beautiful walnut double doors hand hewn by Choctaw carpenters. An elder tells me that cross is crooked because he and some other Choctaw boys enjoyed a rock throwing contest while sipping white lightning late night, "I hit the cross and made it crooked! I won!" I don't know much about what this church looks like inside, only got a glimpse one time. I'm an Indian girl, a Choctaw, I'm the wrong color to set foot inside God's house, just like over at Vic's cafe across from Mack Hendon's general store. Over at Vic's eatin' place he has two front doors with signs above. Sign on the right reads, "WHITE" and the other sign down to the left reads, "COLORED". Never been inside his cafe, my grandma tells me best I stay out of there, like I stay out of the white folks church. A few years back the preacher man tells me Indians are not allowed in his church. He asks me to leave.

Our rural Oklahoma farm is about three miles south of Eagletown, not far, a short walk but this is more fun to ride one of our mules up to town. Now and then on a Sunday afternoon, after our chores are done, my boyfriend takes me up to Hendon's for an ice cold five cent soda pop. I like those cream sodas the best. Billyray says he is not my boyfriend but he is anyhow. He says I'm a little girl and I ain't supposed to be his girlfriend. Someday he will be my husband, I'll see to this, yes, ma'am, I surely will. We fetch soda pops from Hendon's cooler box thing there inside his store. Billy always lets me pull out our bottles. He drops a nickel into a slot over on the side, I slide a bottle along a rack and over into a square fitting thing and lift the bottle out. Down on front there is an opening where you stick your bottle in and pop the cap off. My boyfriend always says the same, clinks his bottle against mine then grins, "Here's to swimmin' with bowlegged wimmin!" I asked him about those women, he says they get that way from rodeo riding big stallions. This way he grins, I'm sure he means something else, stuff I know about.

After he says his swimmin' with wimmin words, we walk out to a boardwalk front of Hendon's and say our howdys to old men sitting out there playing checkers and spitting tobacco juice out on our dirt road. Those old boys are sitting there just about every day mostly gossiping about folks around town and bragging about their glory days.

On a Sunday we are out there listening to those checkers playing old men gossiping about this and that and one of them up and says, "Look over there at that, darn preacher man done got his flock out front and giving them hell for their sins!"

Billyray takes me by an arm, "Come on, girl, we can listen to what the preacher boy is going on about." He drags me a bit and I jerk my arm away then take hold of his hand, "I'm your girlfriend, you're supposed to hold my hand." Billyray tries to shake loose but I've got a grip on him like his fingers are milking cow teats. "You ain't my girlfriend!" I don't let go. Old boy sitting there on the boardwalk teases, "Billyray, is that little injun girl there your girlfriend? Why I declare if you ain't the luckiest boy in McCurtain county, she's a real spitfire! She'll make you a fine hard working wife!" I think this makes my boyfriend mad, he tugs at my hand, "Come on, let's go over to the church." The boy holds my hand all the way across the route and to the church!

Bottom of Church House Hill, we watch and listen for a time while sipping our soda pops. I ask, "What's the boy going on about?" I can't understand much of what he is saying, the preacher man hollers and screams then talks real soft and low and all the while he is shaking his fists and thumping on some book, sometimes he even tugs at his hair then looks up at the sky. Billy explains, "Those folks sitting around the church porch are salt-of-the-earth farmers and the preacher man is giving them a sermon on the mount but he ain't no preacher, he's a southern carpetbagger." This makes less sense to me than the preacher man up there spitting out fire and brimstone like that Del Rio Texas preacher man on the radio in our front room. Billy lets go of my hand then looks around, "Chahta anumpuli." He tells me to speak Choctaw. Although he is a white boy, Billyray speaks good Choctaw like me. I tell my boy I understand, "Akostinincho li". We speak Choctaw to keep people from knowing what we are saying although usually what we talk about ain't worth knowing.

He explains "salt of the earth" is hard working honest people who tend to be gullible, especially when this comes to all this god nonsense. A carpetbagger is a man who put on airs and swindles naive people out of their money, like those church goers all wide-eyed mesmerized by this preaching con man up there on the church porch. "Aba anumpa isht anumpuli, im hochifo Elmer Gantry." I ask in English, "How do you know the preacher man's name?" Billy explains, "Elmer Gantry is not his name, he is like Elmer Gantry in that movie." This time I lay a hand on his arm to have his attention, "Akostinincho li, Elmer Gantry chohmi, hatak isht Elmer Gantry chohmi." Billy pats my hand, "Yes, he is like Elmer Gantry, chohmi not hochifo." Tell him, "You can say 'itiholba' but that means he looks like Elmer Gantry." My boyfriend is a tad bit confused, "A wood likeness?" I slip my arm around his slim waist hoping he is distracted enough to not notice I'm working at pitching a woo on him, "Use 'chohmi' when you act like someone or an animal. We say 'holba' when you always behave like something else, and 'itiholba' means you are carved to look like something. Now tell me about this Elmer Gantry boy." Billy grins at me, "I'll tell you if you stop squeezing the breath out of me." He tugs at my arm and makes me let go of him. Darn him, I want folks to see me hugging Billy so they will know he is my boyfriend and know I'm going to marry this handsome boy. I especially want my girlfriends sitting there listening to Elmer Gantry preaching to see us being all lovey-dovey like a stallion and a mare being playful out in pasture privacy.

Billyray nudges me, "Come on, girl, we need to give our soda pop bottles to Mr. Hendon so he can send them back to be filled up again."

I try to snag his hand but he flits his hand around like a hungry bird after a flying and dodging mosquito hawk, "Quit that, Taha, those old boys over there on Hendon's porch are watching us. They already think we're getting married, if we get to holding hands they'll tell everyone in town we're working at making babies. Grandpa will give both of us blistering bare butt switchings if he thinks we're fooling around." Shoot, that's just what I want those gossipy old tobacco juice spitting boys to gossip about, I want my girlfriends to know Billyray is mine, all mine. I don't want those pretty white girls thinking they can fool around with my boyfriend, he belongs to me.

Mr. Hendon thanks us for bringing those empty bottles back, "Saves me money when I give those bottles back to the Coca-Cola man." Kutcher Hendon is an ornery old man, he eyeballs me, hides a grin, asks, "Girl, has your boyfriend there put a baby in your belly yet?" Oh, this makes me wet-hen mad. I ball up my hands into fists, stand rigid and open my mouth to curse at him, in Choctaw, then I remember what my elder, Bessie, told me, "Don't go and get mad, sass 'em!"

I relax, quit making fists then smile at Mr. Hendon, "Yes, sir, Billyray sure enough did, over there at Mountain Fork River. My boyfriend put a great big baby boy in me! We're getting hitched and I'm going to have a baby!" I pooch my belly out then pat myself with both hands. This makes me belch although I don't mean to. Kutcher gets to laughing and slapping at his countertop, laughs out to Billyray, "I'll tell you, Billy, that girl of yours is quite the liar!" Calling me a liar really does make me mad, you ain't supposed to call a liar, a liar. I just about holler like Elmer Gantry over there across the route, "I ain't lying! Last Sunday Billy and me went skinny dipping over at the river and afterwards we were lying out in the sun," My boyfriend grabs my arm and just about jerks me off my feet, "Come on, we have to get home. Thanks for the soda pops, Mr. Hendon." Billy tugs and pulls at me, "I said 'come on' now get going."