"Two young women entered an IHS hospital in Montana to undergo appendectomies and received tubal ligations, a form of sterilization, as an added benefit. Bertha Medicine Bull, a member of the Northern Cheyenne tribe, related how the ‘two girls had been sterilized at age fifteen before they had any children. Both were having appendectomies when the doctors sterilized them without their knowledge or consent.' Their parents were not informed either. Two fifteen-year-old girls would never be able to have children of their own."
- Jane Lawrence
- "The Indian Health Service and the Sterilization of Native American Women"
- American Indian Quarterly, Vol. 24, No. 3. (Summer, 2000), pp. 400-419.

"IHS" is "Indian Health Service" which is a subordinate department of the federal Bureau of Indian Affairs (BIA). This agency is directly controlled by Congress. 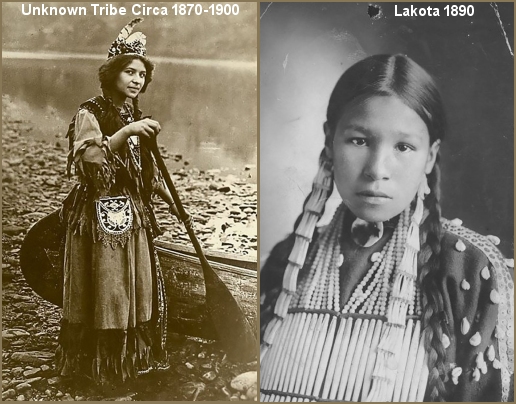 A notion which aggravates us Indians is old photographs from the late nineteenth and early twentieth centuries treat Indian girls in a diminutive sense; we are belittled. Contrasting, Indian boys are macho maximized.

Evidence of this is photographs of Indian girls rarely include a name while photos of Indian boys include a name and tribal status, "chief", "medicine man", "warrior" almost always. This highlights a significant difference between our matriarchal structured Indian culture and the white European patriarchal societal structure; masculine sexism. 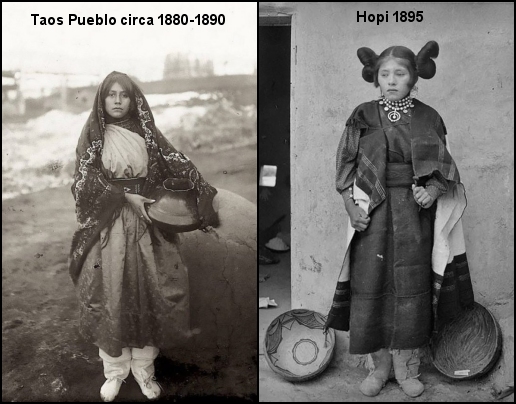 Lovely girls, their jewelry, clothing, moccasins, jug and bowls are all handmade by their tribes. Photo of a Hopi girl on your right is often used on the web to ridicule Indians by reference to a famed Star Wars white girl character. 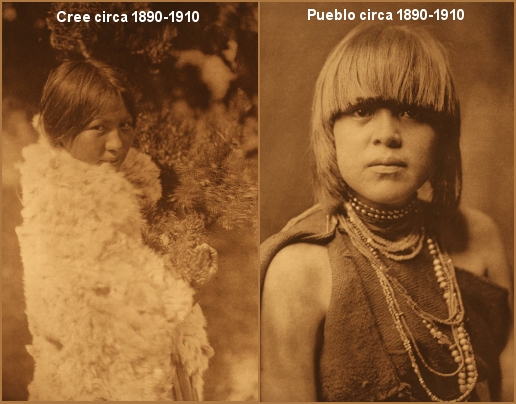 Neat, clean, intelligent and simply stunningly beautiful, those two young girls, if living during the sixties and seventies, would be prime targets for secretive and forcible sterilization by white Christian doctors working for our racist federal government.

All told, over a hundred-thousand Indian girls are sterilized without their knowledge and without their permission. This is genocide by sterilization sponsored by our American government. Goal of our predominately white Christian controlled government is complete and absolute extermination of all American Indians. 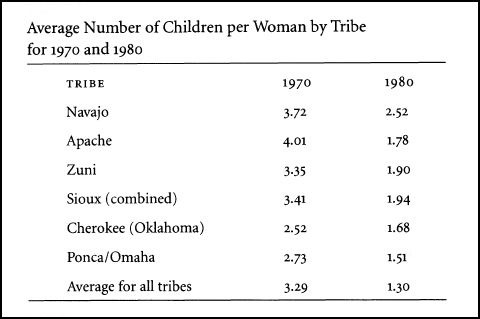 A birthrate chart produced by Jane Lawrence for her cited research report. Our Indian peoples birthrate is reduced by more than half by American sterilization genocide. Data is based upon 1970 and 1980 years Census Bureau statistics.

"National Geographic Syndrome". This is a psychological affliction suffered mostly by white Christian men. Church dogma fiercely prohibits nudity for any reason. Nudity is the work of Lucifer. White boys turn to pages of National Geographic to see nude indigenous women, "This is not sinful, this is science!"

Look again at those bare breasted Indian girls. A Kiowa girl on left and to her right, another girl designated as Wichita. My knowledgeable Indian eyes instantly inform me both girls are Kiowa-Apache. Look once more, both girls are wearing the same clothing and necklaces provided by a photographer; fakery. There is only one Wichita girl with black hair over far right.

Those nameless Indian girls are used by a photographer not for scientific research rather they are photographed and profit sold into sexual lust of white man. Using a guise of science is a common time period trick to slip past stringent Christianity based government censorship. This is Christian sponsored masculine sexism. 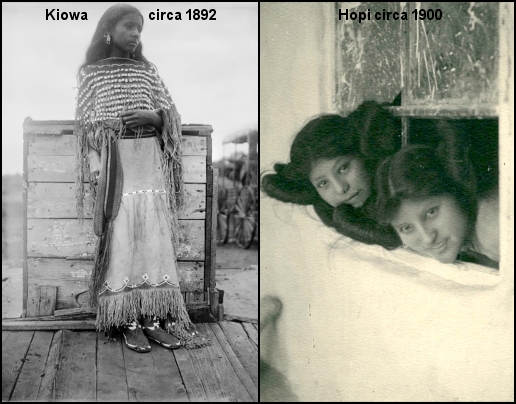 Federal government excuse for secretive and forcible sterilization of Indian girls is, "Those Indian girls are too stupid to follow birth control pill directions."

There is no greater tragedy than a barren woman.

Truth is our Indian peoples are a thousand years more advanced in medical sciences than contemporary white Europeans of the late nineteenth century who come to kill us and take our lands.

During our upbringing, we Indian girls are well taught natural healing arts so we can take care of our families and our peoples. American Indians are the first to recognize and use a "rhythm method" of birth control; we are aware of menses fertility windows. We use a wide variety of herbal mixes to enhance chances of pregnancy, to prevent pregnancy and to induce abortion when needed to protect a mother.

They call us stupid savages who are to be rendered namelessly barren.