To fluently understand and speak an American Indian tongue a person must enjoy deep knowledge of a tribe's traditions, lore and history. There is truly a need to be born to and raised within a tribe or, at least, be submerged within a tribe for decades.

There are no written Indian tongues, none. Our languages are taught through oral story telling of our traditions and lore. Typically this is women of a tribe all of whom are mothers to every tribal child. Our histories are more often taught by certain elders; keepers of our wisdom.

For centuries our peoples suffer the American Indian genocide. We are killed to near extinction, many tribes tragically become extinct. This killing breaks our system of learning. Our mothers, our fathers, our children, chiefs, medicine men, healers and keepers of wisdom, all are systematically killed. There are none left to teach new generations of our wisdom learned over more than ten-thousand years.

A century and more back, almost all Christian missionaries are genocidal maniacs. Those of faith in the Christian god come to enslave us, torture us and kill us. There are a few rare exceptions. Amongst those exceptional missionaries is Cyrus Byington who is respected and honored by all of our Choctaw tribes to this day. Graphic is of a Choctaw dictionary created by Cyrus Byington over fifty years and more. Ours is a hardbound first edition signed by his only surviving son. Current cited collector value of this dictionary is around two-thousand dollars, but is priceless to our family. We use thick dog-eared worn-out paperback versions provided by the Smithsonian.

Life of Byington is exceptionally well documented by church papers, historical documents and especially hundreds of personal letters between he and his family. Byington is also an integral part of our Choctaw lore and history. We Choctaw honor him for his being a good man.

Although educated to be a lawyer, Cyrus Byington is true to his faith. During 1821 year he travels to Mississippi to live amongst Choctaw and to be a Christian missionary. He lives with our Mississippi Choctaw for about fifteen years then Christian Americans suffer abhorrent tragedy upon all Indian peoples, everywhere across our nation.

President Andrew Jackson sets a military policy all Indian women and children are to be killed wherever and whenever found, with prejudice. Jackson is an evil man doing the work of Lucifer, he orders all Indians across America to be death marched. Tens of thousands of our peoples are killed. For Choctaw, Cherokee and many other tribes, this is the "Trail of Tears". Cyrus Byington, true to his faith and true to Choctaw, travels with our peoples to Eagletown, Oklahoma which is our hometown. Remains of the original Byington homestead are only a few mule miles north of our farm. Cyrus Byington pays a tragically high price for his devotion to Choctaw.

This tragic Trail of Tears horror splits our Choctaw into two tribes, Long Town down in Mississippi and our Sixtowns in Oklahoma. Byington lives with our Sixtowns tribe for thirty-one years. This price he pays is heartbreaking. Byington, wife and family are critically ill many times, Choctaw help to heal them. 1834 eleven year old son of Byington dies of an illness. Sister to Cyrus arrives to help, she dies a few weeks after arrival. 1846 a son, not yet three years old, dies. Final outcome of those tragedies is only one son and one daughter survive. His son is Cyrus Byington, Jr. whose signature is inked on our first edition dictionary.

1866 suffers another high price upon Byington, he contracts smallpox which nearly kills him. His son transports Cyrus by horse-drawn wagon a couple hundred miles to Little Rock over in Arkansas then on up by steamboat to Ohio to recover and live with his only surviving daughter, Lucy. Wife of Cyrus, a good Christian woman named Sophia, remains in Eagletown to continue their missionary work.

Although smallpox renders Cyrus almost blind and near deaf, he continues his work on his Choctaw dictionary until Old Man Death takes him in 1868 year. His wife, Sophia, survives until 1880 year.

A few short books, simple grammar, church hymns in Choctaw, are published after Byington dies. His dictionary is edited by John Swanton and Henry Halbert making for a book over two inches thick and over six-hundred pages. Byington's dictionary is submitted to the Smithsonian in 1909 year and published in 1915 year. His book is the only of this kind, no other tribes enjoy such an extensive work.

This is one of our two thumbed-to-old modern paperback versions: 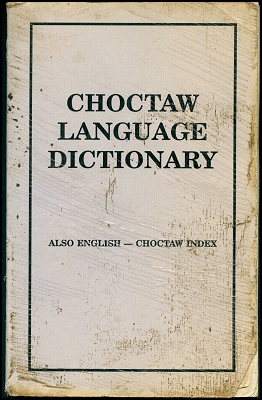 Cyrus Byington performs a priceless service for our Choctaw peoples and Cyrus suffers many tragedies doing so. We Choctaw respect him and honor him for this. He is, in every way, Choctaw and a member of our tribe. Cyrus leads a humble Christian life and gives Choctaw a chance at cultural survival through preservation of our native tongue within which are lessons and lore dating back more than ten-thousand years.

His is not a true dictionary rather is a phonetic guide with definitions. Words in his book are "sound spellings" to help readers pronounce our words. There are no written American Indian tongues, none.

This Byington dictionary is not without challenges and some errors here and there. Most noticeable challenge is his interpretations are often written with biblical verses. Understanding his meaning requires reading those verses then interpreting this to Choctaw thinking. Some of his meanings are not quite right and often lacking depth of true meaning.

Another challenge, with Byington being a Christian man, is words and expressions related to genitalia, sexuality and sex are omitted. This is problematic but we Choctaw understand certain topics are fiercely taboo for Christians. Not for American Indians, though. We are not Christians.

Title of my essay is "nitak hollo chito" which interprets to "Christmas" in the mind of Byington but not in our Choctaw minds. Literal is "day spiritual big" - an important sacred day. We Choctaw say the same of the equinoxes and solstices. More important, this is also a day when a girl begins menstruation. "nitak hollo chito" - our word "hollo" actually means "to menstruate" which is deeply sacred to Choctaw. This will become exceedingly complex with a few short sentences.

Choctaw do not have traditional words for "days" nor "years". Our "nitak" means daylight and our word "ninak" means nightlight. We do not have days rather the sun is up or the moon is up; daytime or nighttime but not a "day". Our notion of a month is based upon cycles of the moon and cycles of girls' menstruation, both are twenty-eight days in length, start to finish.

Although Byington lives with Choctaw for a half century there is still a language barrier. He is raised Anglican, we are raised Choctaw. Missionary Byington never enjoys full understanding of the depth of meaning of our words and expressions. All Indian tongues are this way; complex.

"nitak hollo chito" actually means "daylight spiritual menstruation big". This is our learning and lore which has Choctaw think, "An important spiritual event" which is still not quite right in English. 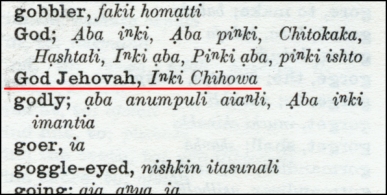 "iki chihowa", said "in-key chee-how-wah", is not a Choctaw expression. This is invented by Cyrus Byington. Our word "iki" means "father" as in "daddy". This word "chihowa" has no meaning, this is not a Choctaw word. There is no lore behind this word. Intent of Byington is to give the Christian god a name in Choctaw but Cyrus is unaware our lore is what gives words meanings.

Three of us in our family are fluent Choctaw speakers. We read "iki chihowa" and think, "OK, father and some weird gibberish." When meaning is explained by Cyrus, we think, "How can my father be a god? He is my daddy!"

These are some words of many invented by Cyrus. This is not a complete list, there are hundreds more words Cyrus invented and added to our Choctaw tongue:

Although Cyrus Byington is sincerely a good man, he violates the Star Trek prime directive, he breaks the most critical rule of anthropology, he interferes with a culture of study, Choctaw, by creating new Choctaw words which, unknown to Cyrus, are meaningless, are gibberish.

Reason this happens is Cyrus' mind is caged and confined by Christianity. He is not capable of thinking outside of his box of faith. Byington naively overlays his Anglican culture upon our Choctaw culture. He employs grammar rules of English to fabricate Choctaw words.

This problem becomes much worse. I selected a word which opens up a gallon size can of linguistic worms. This word is "circumcision" and derivatives.

Previously I write Cyrus Byington omits words related to sexuality and sex. Those words and topics are sinfully taboo within Christian doctrine. Cyrus cannot write those words because his mind is imprisoned by religious dogma. Follow along and discover how quickly all goes totally haywire while Cyrus tries to define circumcision.

Right off there is a severe problem. Our American Indian tribes date back more than ten-thousand years before the birth of Jesus Christ. We know nothing about Christianity and know nothing about religious circumcision. We hold our genitalia, pun intended, to be of a sacred nature. Those are tools of creating life, we would never mutilate our genitalia. Doing so would be a deeply sacrilegious offense.

For whatever reason Cyrus assumes our peoples understand this notion of circumcision for God. He writes several derivatives into his dictionary.

Flipping several hundred pages over to his Choctaw section, "hakshup taptua" and variations are found along with references to biblical verses. 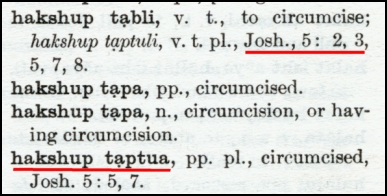 hakshup is a noun thing:

taptua is an action verb: 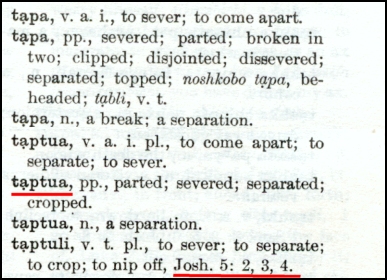 This is equally clear as Joshua:2-3 a noun object is missing for Cyrus' "circumcised". This noun object of our taptua verb is "penis". Christian genitalia is sinfully taboo. Byington omits sexual words from his dictionary. Cyrus cannot write our Choctaw word for penis. This renders his invented expression for "circumcised" amusingly meaningless.

Church dogma rumbles right down the time line. Today, Choctaw do not know our traditional words for genitalia, Cyrus omitted those, Christians tell us we are not allowed to speak our native tongue, older Choctaw die off and too many of our words are lost to genocide and time.

This is my gallon size can of linguistic worms; destruction of a native tongue and culture.

After a couple decades of researching, best I am able to discover from obscure references is a root word for genitalia is "hashi" which is a spiritual word meaning "sun" and "moon" depending on context. This is related to fertility and pregnancy both of which are of a sacred nature.

Summarizing, there are no written Indian tongues. All traditions, lore and lessons are passed by oral story telling. Genocide severed our generational link to learning our old words and our old ways. No Indian tongues can be translated, our tongues can only be interpreted to best meaning in English. Cyrus Byington, a missionary, was a true Christian and a good man. We respect him and honor him for preserving our Choctaw tongue. His dictionary is a wonderful gift to our culture despite those linguistic worms but Christianity gets in the way of effective teaching and learning.

My essay is a complete outline of a lesson plan spanning three or four days of teaching at a rate of an hour per school day. These principles can be applied to any languages of our world; interpretations are to be cautious. Inherently you do not need to use my "circumcision" example although this word does rivet eyeballs and attention of older students to a teacher's forehead.

This is my "habena nitak hollo chito" - my Christmas gift to you white Christian teachers, a gift of learning for you and, for students. 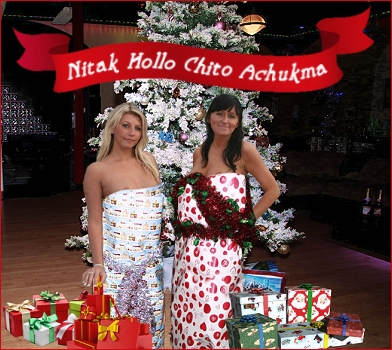