This wildly popular "G-Spot orgasm" is a myth and a "vaginal orgasm" is a myth. Neither exist, both are literally impossible. Mother Nature did not equip girls for either. Both harmful myths are born of ignorance, masculine sexism and today, multimillion dollar commercial profits. 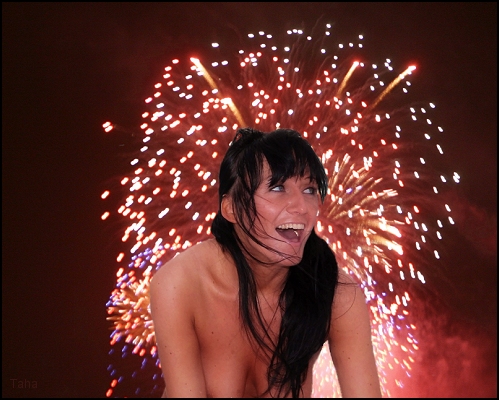 "Orgasm is a normal psycho-physiological function of humans: women have the right to feel sexual pleasure, and for this reason sexual medicine experts and sexologists must spread certainties on the biological basis of the female orgasm to all women, not hypotheses or personal opinions, and they must use scientific sexual terminology."


- Dr. Vincenzo Puppo and Dr.Giulia Puppo
- Anatomy of sex: Revision of the new anatomical terms used for the clitoris
- and the female orgasm by sexologists
- Clinical Anatomy, April 2015 28: 293-304.

Vincenzo Puppo and his daughter, Giulia Puppo, are a medical science team researching, studying and reporting on sexual health related issues. In this case specifically female orgasm origins and mechanisms. Their research efforts are peer reviewed and widely acclaimed as factual and realistic. Those two are myth busters.

This father and daughter team reminds me of our family of three. We are always chasing after truth through direct experience and shared learning. We earn our college degrees. Our cowboy chooses to simply be a hard working man. Our girl is a clinical psychologist. I become a rather pedantic English professor. We know and revere this intrinsic value of old fashion smarts.

This sexual tomfoolery is initiated by Regnier de Graaf, a Dutch physician, by making headline news back in the 17th-century, a time period of few newspapers and a lot of ignorance and illiteracy. Graaf writes of an "erogenous zone" within a girl's vagina which, centuries later, leads to this myth of a G-spot. Graaf also writes of "female ejaculation" setting a centuries old stage for advent of a mythical vaginal orgasm.

Hundreds of years later in 1950 a German gynecologist, Ernst Gräfenberg, writes a short single page opinion piece. In part he writes, "A rather high percentage of women do not reach the climax in sexual intercourse... Frigid women can enjoy orgasm... A woman with only clitoris orgasm is not frigid and sometimes is even more active sexually, because she is hunting for a male partner who would help her to achieve the fulfillment of her erotic dreams and desires... insertion of the penis in the external orifice of the ear are other illustrations of the variability of the erotogenic zones in females."

If our cowboy were to stick his penis in my ear, I would raise knots on his head with a stick.

Gräfenberg continues his weird rant, "I have seen two girls who had stimulated themselves with hair pins in their urethra... During the ecstasy of the orgasm the girls lost control of the pin which went into the bladder... a huge bladder stone had developed around the pin... Since the old hairpins are no more in use, pencils are used for urethral onanism... I saw a patient with a rifle bullet which glided into his bladder. He had played with it while he was lonesome on duty on New Years Eve." 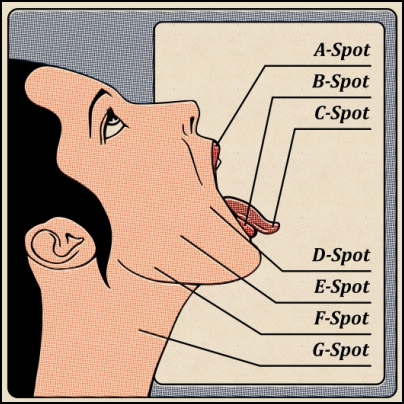 Gräfenberg, a quack doctor, renews this myth of vaginal orgasm, "If there is the opportunity to observe the orgasm of such women, one can see that large quantities of a clear transparent fluid are expelled not from the vulva, but out of the urethra in gushes."

Those of acceptable common sense call this gushing fluid, "pee".

During his brief tirade Gräfenberg labels women as sexually inadequate, fabricates the vaginal orgasm and creates a premise for this myth of the G-Spot. The boy quacks like Daffy Duck.

As with a previous essay I avoid use of gibberish Latin terms in my graphic up next. My "Clit" is the external bud of a clitoris. This graphic displays relative positions of the alleged G-Spot, vagina and clitoris. This is a generalized depiction, there are numerous variations. This is important to note only a clitoris can trigger an orgasm by screaming in a girl's mind, "Climax!" 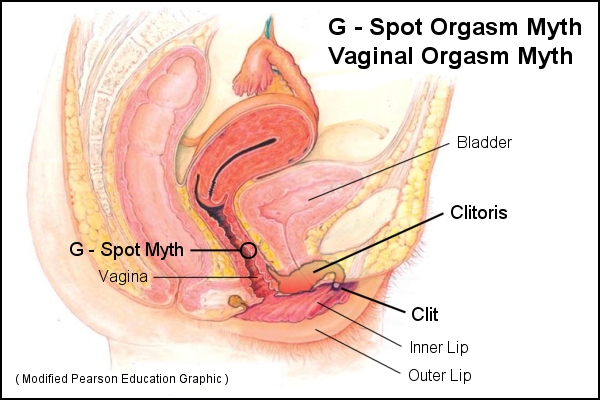 This area labeled "G-Spot Myth" is not directly associated with a clitoris, there is distance between. While there are thousands of nerves wrapped around a girl's vagina and interconnected to her clitoris, none of those nerves can send a signal "Orgasm!" to a girl. Only a clitoris can send this powerful overwhelming signal. Discussed in a previous essay, the most pleasure sensitive area of a vagina is the first inch or so immediately adjacent to a clitoris. From this stretch of a vaginal opening on deeper in pleasure sensitivity diminishes and is almost none at cervix. We girls can feel a penis back there but this is more a sense of "feel" and less a sense of "pleasure". At the mythical G-Spot, only slight pleasure sensitivity, not enough for orgasm.

In 1982 a book titled "The G Spot and Other Recent Discoveries About Human Sexuality" is published and becomes a New York Times bestseller. This book is written by Beverly Whipple, Alice Ladas and John Perry. Those authors deeply embed "G-Spot" into the mainstream American mind. This new fashionable word G-Spot spreads like our fire down below.

Not well disclosed those three authors did not perform scientific research nor clinical trials. They did not gather verifiable evidence nor submit to peer review. Their declaration of the G-Spot is based upon a few anecdotal stories pulled from history dating back centuries. Within their folder of phony research is this crazy Ernst Gräfenberg story of a woman ejaculating urine, a penis shoved into an ear, girls with bobby pins inserted in their urethras and a boy with a bullet flying up his penis. Whipple, Ladas and Perry love those insane stories and promptly declare the G-Spot to honor Gräfenberg. Soccer moms across America go wild and take to hollering "G-Spot! G-Spot!" at their kids' soccer games. The New York Times declares a bestseller hoax, the G-Spot. There is an honorable mention of vaginal orgasm but this is not as exotic nor erotic as "G-Spot!"

A problem exists. Those anecdotal stories of a G-Spot and vaginal orgasms are based upon only three or four women of history who consulted with urologists because of difficulty controlling urination, they piddle without choice.

Essence of this Whipple-Ladas-Perry research is, "A doctor says a woman says...." This is, of course, classic gossip; no first hand nor eyewitness accounts. Nonetheless a couple of doctors, Graaf and Gräfenberg, a rather amusing pairing of names, those doctors do enjoy copping feels of a few vaginas of women to a point of what is falsely claimed to be vaginal orgasm and an odd ejaculated fluid none recognize for what this is, pee.

At distanced times in history, Graaf and Gräfenberg slip fingers into a few vaginas and take notice of a lump or a hump inside about halfway deep. Upon fondling, pressing, pumping and otherwise manipulating those internal vaginal protrusions of women suffering incontinence, inability to keep from urinating, those women claim to be sexually aroused, experience what seems to be vaginal orgasms then blast out a short bursts of ejaculate, namely pee.

An amusing note is each of those women just before "vaginal orgasm" reports a feeling or sense of needing to urinate and, they do. Graaf and Gräfenberg declare bursts of pee from those women to be magic elixirs of vaginal orgasm. This is doubtful those boys swallow for their women.

This graphic visually explains what actually happened to those women suffering incontinence. "Anterior prolapse, also known as a cystocele (SIS-toe-seel), occurs when the supportive tissue between a woman's bladder and vaginal wall weakens and stretches, allowing the bladder to bulge into the vagina. Anterior prolapse is also called a prolapsed bladder."
- Mayo Clinic

Common layman terms for this unfortunate medical condition are "hernia" and "rupture". This is a woman's bladder literally protruding into her vagina. What Graaf and Gräfenberg feel when those boys slip their fingers up a vagina of a woman suffering incontinence is her prolapsed bladder. Inherently pressing on her bladder will cause urine to spurt out like a squirt gun. 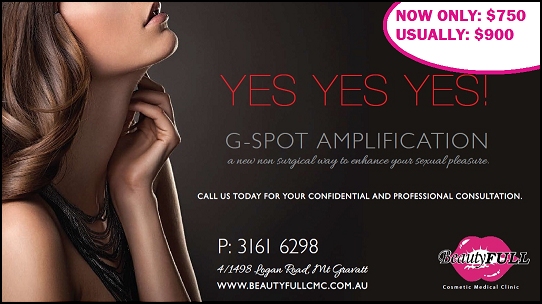 Back in 1982 year, Whipple, Ladas and Perry earn a lot jingling coins for pocketbook and pocket by proclaiming the G-Spot and vaginal orgasm to be the latest and greatest raving fad of all human history. The New York Times declares this the best selling hoax since the fabrication of some omnipotent god up in the sky. Today, those myths of the G-Spot and vaginal orgasm are wildly driven by an easy-to-understand notion: annual multimillion dollar sales of sex toys specifically targeting gullible women and men who want to experience those wild myths. I am more prone to believe in unicorns who ejaculate rainbows.

Oh My G-Spot! This is the best imaginary vaginal orgasm ever! 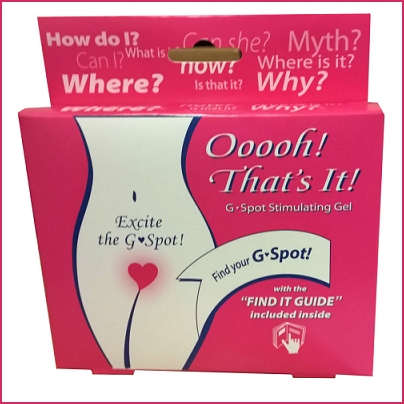 On vaginal orgasm our cowboy is an exceptionally delightful lover. His talented techniques have a gasping girl feeling what most certainly seems to be a vaginal orgasm. This Okie cowboy of ours knows ways and positions for a girl to enjoy intercourse and stimulation of her clitoris both at the same time. No surprise during our younger years every girl and some housewives around our rural farming town wanted him for their own and they did have him least for a time. Drove me crazy keeping those girls away from this love of my life.