"What's in a name? That which we call a rose By any other name would smell as sweet...."

Your high school English teacher did not teach you much about William Shakespeare. This true history of Shakespeare is whitewashed and glossed over. A literary genius, Shakespeare slobbered his stories and stage plays with sexuality, sex and outright pornography. The "Bard" should be nicknamed "Bawdy Bard" for his sexually subtle usage of puns and wordplay. 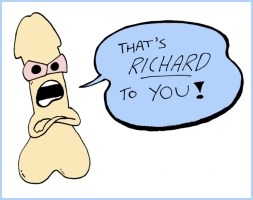 "Come, night; come, Romeo; come, thou day in night;
For thou wilt lie upon the wings of night...."

This seems an innocent and romantic passage of Juliet. Substitute "vagina" for "night" and substitute "penis" for "day" along with a couple other words and you will know Shakespeare's true meaning:

"Come, vagina, come, Romeo; come, thou penis in vagina;
For thou flaccid lie upon the semen wings of vagina...."

Nor did your English teacher discuss "William Shakespeare" is likely a nom de plume, a pen name. None know nor will any ever know his true name. There are two leading rumors about Shakespeare. Some hold Shakespeare is actually Edward de Vere the 17th Earl of Oxford, a lover of Queen Elizabeth the 1st, a delightfully naughty queen who presented herself as the "Virgin Queen" for political expediency. Like the Virgin Mother she is certainly not a Virgin Queen.

More saucy, a second rumor is Edward de Vere is a son of Queen Elizabeth and those two, Edward and Elizabeth, son and mother, enjoy an incestuous love affair producing a son, Henry Wriothesley the 3rd Earl of Southampton, who is thought to be Shakespeare.

Incest is not uncommon during the time nor is incest uncommon today. 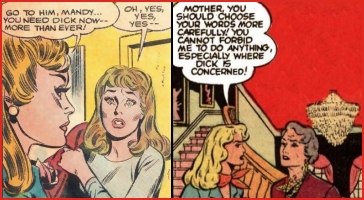 Oh no, your English teacher most certainly did not discuss this during class.

During this era of Shakespeare a great "war of vowels" is fought. Early English of the sixteenth and seventeenth centuries had vowels enunciated differently than today. Aristocrats, Archbishops and others generally of the elitist ruling class waged verbal wars on how English should be spoken to be the Queen's Proper English.

A favorite Shakespearian naughty pun is our word "count" like Count Dracula. Shakespeare used this word "count" in some of his passages about women. Virtually none give this thought except those of us who are aware back then "count" is enunciated "cunt". I know, I know, I am a girl and I should be offended by Willy Masturbator. I am not.

A most impressive talent of William Shakespeare is his clever talent at pun and wordsmith. I admire this imaginative and impressive ability of Shakespeare to twist around words into sexually amusing double meanings. I am not offended by him, I am in awe of him.

This is context and how we use words which can be either delightful or offensive. We all know dirty talking during sex is fun, and we all know a dirty mind is not fun. Dirty is good, dirty is bad, depending upon intent. 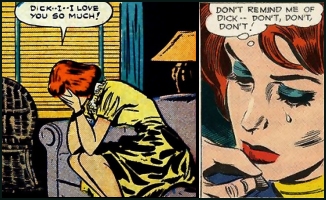 During those high literacy days of Shakespeare people are generally more literate than today, least amongst the elite, not so much the peasant nor serf class. Many centuries later society at large has changed. We enjoy more freedom of speech and thought at a cost of literacy. This freedom allows us to use simple words which in past times were offensive. Not many today enjoy this talent of Shakespearian wordsmithery.

Sexuality and this art of seduction are directly dependent upon literacy level. Too often people utter words which impart a wrong message or are offensive. Literacy abilities are poor today.

I am reminded of my recent essay, Bragging Rights. Gist is we are attending a barbeque party, a bunch of Budweiser guzzling beer bellied boys are bragging on how big are their little pride and joys. A macho boy tells his girlfriend, "Go get me a beer, bitch!"

We are shocked by such rude language even during these modern times of anything goes. Our daughter is especially enraged. Rather than verbally object our ornery girl takes action to deflate sexist egos of those boys. Assertively and loudly she says, "My daddy is bigger than any of you boys," then she unbuttons our cowboy's jeans, carefully pulls out his Richard and shows them.

Those boys are stunned to silence except for one who stupidly blurts, "Damn!"

Calling a girl the B-word or the Shakespearean "count" word, this is not sensuous nor seductive, this does not deliver a message of love. Those boys are quintessential illiterates, quite crassly so.

Clever and imaginative literacy is a key to healthy sexuality and enjoyable seduction. Well spoken humorist William Shakespeare could charm the corsets right off Queen Elizabeth as did his father-brother, Edward de Vere. Whether girl or boy improving your literacy skills, reading and understanding giants of literacy like Shakespeare, this will help you be a sultry Southern girl or a charming cowboy gentleman.

I am certain you readers know this is well chosen words which lead to enjoyable sex. 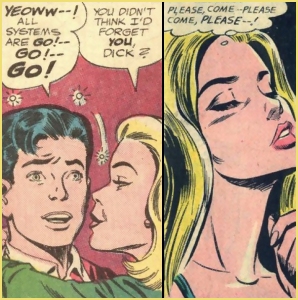 Comic strips are pulled from a variety of "romance comic books" quite popular with young girls, teenage girls and housewives of the Forties and Fifties. Those comics well exemplify words are to be carefully chosen lest you send a wrong message. 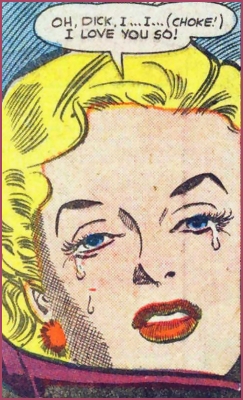