This essay will discuss traditional Indians being both sexually superior and morally superior to commonplace Christians. My essay links directly back to my immediately previous writings, Kokopelli. 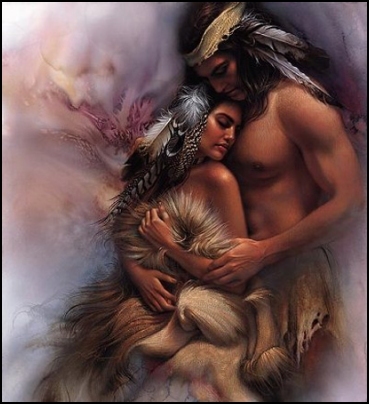 "Native Americans enjoyed a richly sexualized discourse ... evolved their own protocols for dealing with gender issues and sexual deviance ... written constitutions adopted in the nineteenth century by the Cherokee, Choctaw, Chickasaw, and Muskogee tribes made no provision for obscenity, apparently because it was never a matter of dispute...."

We traditional Indians do not see obscenity. This notion never developed within our thousands of years old culture. Just isn't there. Our belief is there are only actions and consequences both good and bad. 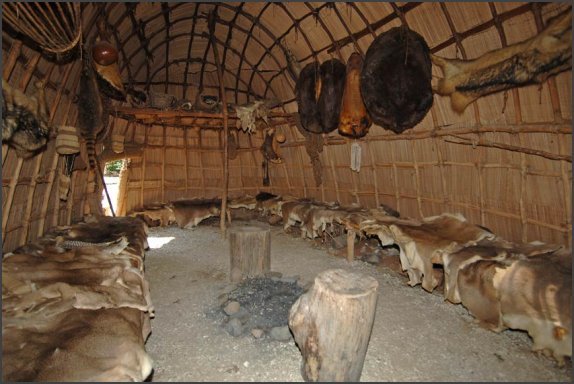 Chesapeake Bay region Powhatan Confederacy living quarters. Powhatan is a cooperative collection of many tribes living a communal lifestyle under leadership of a paramount chief. Pocahontas is born within and lives within a home like this.

These are large structures build by tribal women. There is room for thirty to fifty tribal members. Many families live together. Typical clothing is none, all are nude least during comfortable weather. Nudity is our chosen common sense mode of dress. Families talk, laugh, eat and sleep in here.

You are seeing platform beds for sitting and sleeping. Those beds are luxuriously covered with a variety of furs for comfort and warmth. Family adults also enjoy sex on those beds, with children present and most often in bed as well. This is not children are "allowed" in bed, this is kids are welcomed to watch and learn about sex. Family children snuggle up to parents enjoying sex, kids watch and talk, ask questions, are playful and get their hands in there to feel and experiment. This is enjoyable and loving for all while those kids are not pesky! Almost all traditional tribes across America practice this openness. Nothing is hidden, no topic is taboo, no behavior is taboo, there are only actions and consequences. There are some boundary lines, but not many.

This is the best possible sex education for kids; real life hands-on learning. Our family is no different, we are traditional, we raise our daughter in our traditional ways. Well, unless she becomes pesky then we push her off side of our bed!

Contrasting, Christians hide in a bedroom behind a closed and locked door with a sign hanging outside, "We are being bad. Stay out." This sends a message, "Sex is sinful." All kids quickly figure out what their parents are doing in there, and all kids learn sex is bad behavior to keep hidden from others. This is the worst of sex education; none.

This open and honest lifestyle is possible because we traditional Indians are not Christians; we do not suffer this inane and hypocritical sense of Christian guilt and sin. Our Indian children learn well and grow to be responsible, well balanced, happy adults. 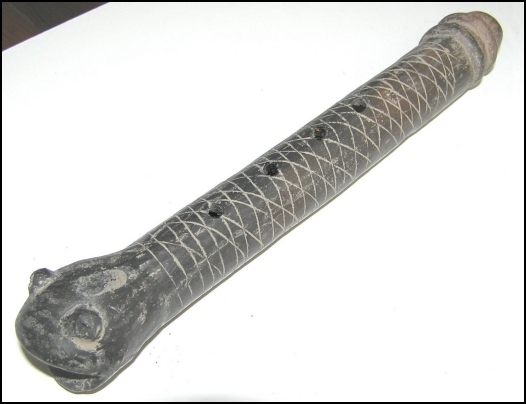 A wooden flute originating out of the Pacific Northwest from a "totem" tribe. Which tribe is uncertain. A totem is a symbolic rendering of some philosophical notion. A totem can be the size of your little finger or, as you know, thirty feet tall!

Foreground end of this flute is a snake head. Meaning of this symbol depends on which tribe and during which time period. Snake spirit is most often associated with the circle of life or a completion of a life's path and new birth. This snake is in a positive sense, a good thing; creating a baby.

Background end, this is rather clearly a penis head. This is the mouthpiece for playing. I don't need to discuss this is quite sexual! Most likely, almost a certainty, this flute is instrumental to a type of fertility rite. Flute music would be accompanied by drumming, singing and trance chanting, possible even dancing. A chief, a medicine man, a wisdom keeper would officiate ceremonies. Concept is this flute music is alluring and lends to opening a portal to the spiritual world. Lovely flute music entices spirits to come and join in celebrations. Those spirits are asked to help Indian girls become pregnant and, they do! 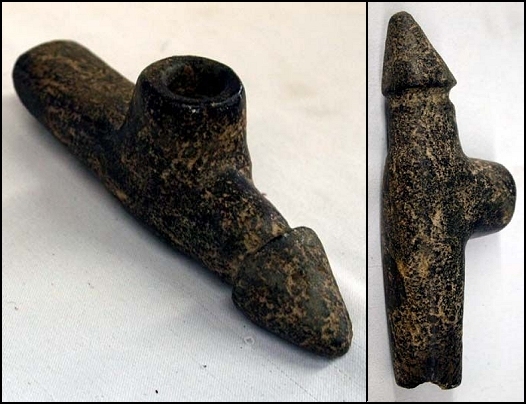 A pipe fashioned by carving "steatite" rock more commonly called "soapstone". Steatite is a metaphoric rock and very durable. This rock is used for making pots, pans, fireplaces, statues, counters and many other usages including jewelry.

Steatite is only found in tectonic subduction zones which are almost always hosts to earthquakes and volcanoes! Here in America this can only be the Pacific Northwest north of San Francisco and south of Vancouver; totem tribe territory.

Best known Indian pipe is a calumet or "peace pipe". This pipe in my photo is ceremonial and used in fertility rituals. Few people know about this pipe usage. This size and type of pipe is also used for administering herbal medicine in small doses and not necessarily by burning. Business end, "draw" end, is backside away from this quite charming penis head.

Some herbal remedies are to be in super tiny doses, powerful stuff. Nightshade is example, and is deadly poisonous. Eating a small leaf, one or two berries, will quickly kill a girl and her horse as well. My Choctaw elder, a woman, teaches me ways of herbal healing since I am a toddler. She has me try nightshade, more hands-on learning! I touch end of an index finger to a bottle of powdered nightshade, just enough to dust my finger. I rub this on end of my tongue, within a minute my tongue tip is a weird kind of numb, not painful but certainly uncomfortable. My elder wags a finger in my face, sternly teaches me, "Use this only to kill a person."

We Indians enjoy literally thousands of herbal remedies for almost every common malady. We cannot cure cancer but we can cure your headache and sew up your cuts. Virtually all pharmaceutical medicines made in America are herbal recipes stolen from us Indians. Some are dangerously powerful and difficult to deliver as a finger pinch dose.

A powdered herb can be provided in a tiny dose by placing a finger pinch in a pipe bowl, sealing lips over the bowl then gently make a puff to send medication dust out mouthpiece end into a person's mouth. This delivers a dusting of medication to tongue, cheeks, throat and some down throat to lungs. Absorption only takes seconds. This is much faster than drinking an herbal tea or chewing and swallowing leaves. A dusting method is less painful than rubbing on a stinging nettle poultice; works nice for children.

However, pipe in this photograph has a most delectable penis head. Probably not a good idea to use this for children; they would take to laughing.

This pipe is certain to be used for a ritual ceremony. Might be like a pass-around calumet to offer puffs of smoke and truth of words to four points of wind. A healer might use this to deliver remedies. Somehow, someway, this pipe is for sexual rituals. 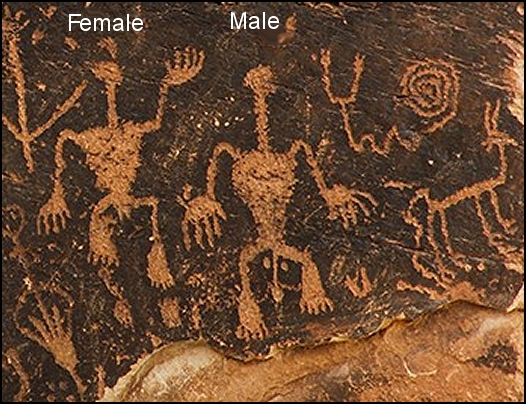 Ignorantly arrogant white man believe Indian petroglyphs to be childish cartoons. Petroglyphs date back centuries, even millennia, and tell long and elaborate stories. This is exceedingly challenging to interpret and read an Indian story correctly. Anthropologists and specialists work on a set of petroglyphs for years and remain uncertain. Most formidable obstacle for scientists and layperson alike is assuming an Indian mind set. Actually, this is impossible for mainstream Americans to well understand how we Indians think.

On your left edge is a girl Indian. Center is a boy Indian. Just right of the boy is a clockwise spiral with a squiggly line at end which turns upward and forks. This spiral circle represents "Journey of Life". Squiggly line which forks is Snake spirit who symbolizes rebirth, renewal, new life upon end of their journey in life; death.

Beneath the spiral is a pronghorn antelope of the Southwest. This antelope is standing still signaled by straight up horns. When in motion, horns curve to back. Body and horns of this antelope are thin meaning not burdened: swift, agile. Basic story of a complex telling is of a girl and boy walking their path in life while hunting antelope.

Those are Hopi symbols but there are other tribes mixed in on "Newspaper Rock" down in the Petrified Forest National Park. Sorting out which tribe, time period and meanings is an almost impossible task which requires much knowledge and an Indian mind's eye to see a flow of a story. 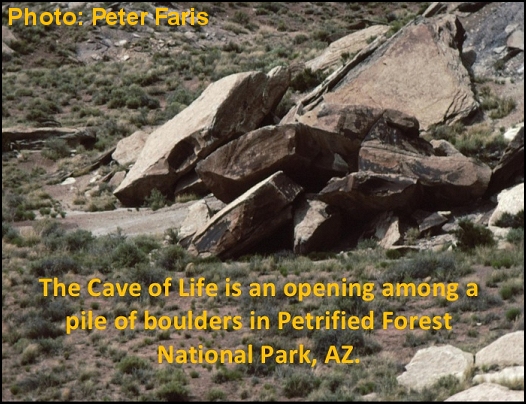 A perfect location for conducting ceremonies. Plenty of room for a tribe to stand or to sit. Flat platform like rocks for lying down if needed. There is a pedestal like structure where a chief or medicine man can stand and lead rituals. Most important, a small secretive cave to conceal and protect sacred petroglyphs. This is "Cave of Life". 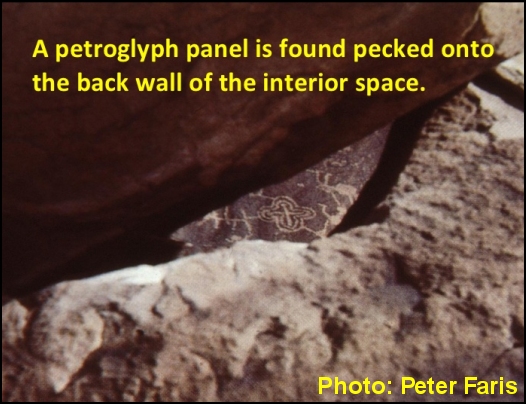 Almost invisible, hard to reach, along this ancient time line an Indian expended much time and effort lying on his belly to peck those petroglyphs. This is a sacred place. 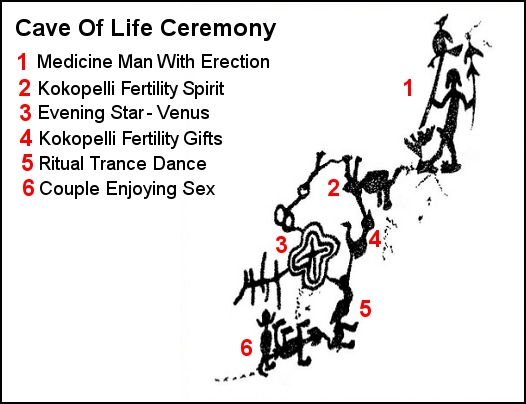 A replication chart to have this easier for you readers to see and understand this story. Charts like this are common to anthropologists and other fields of study.

Story flow is from top to bottom. At top, 1, is a medicine man performing his duties. He is noted by ceremonial staffs he holds in his hands. His erection signals this is a sexual rite. This might be a display of respect for Kokopelli spirit or might be this medicine man participates in sex acts like intercourse. His erection could be symbolic or real life.

At 4 is the gift bag of Kokopelli and is spiritually connected to dancing tribal members at 5 position. Fertility is sprinkling down from the Evening Star onto the girl on her back at 6 spot where a man is enjoying intercourse with her noted by his arrow tip penis.

We Six Towns Choctaw believe our moon is female and our sun is male. We refer to both with a root word "hashi" which infers a powerful spirit. Like women and men of our tribe, moon and sun are equals; there is no sexism. No Indian tongues have a word for "sexism". We have no word for obscenity nor a word for sexism, we do not suffer either.

Sun chases Moon across our skies. Sun catches Moon and they mate. This sexual mating is during New Moon - no moon. When Moon begins waxing and growing larger, especially during full moon, she sprinkles fertility upon Choctaw girls and we become pregnant! This is a belief system quite similar to the Southwest belief in Kokopelli.

My opening volley is we traditional Indians are sexually superior and morally superior to standard issue Christians. This essay relates why. We Indians do not consider sex to be obscene nor our nude bodies. We believe sexuality is common sense natural. Our way is to not hide anything from our children nor others; we are open and truthful. Our kids receive the best of sex education, we prepare them for realities of life. Our peoples take responsibility for our actions and accept consequences; we do make excuses nor judge.