Bungling Work At an Execution in Indian Territory. A Choctaw Murderer Is Shot, but the Sheriff's Aim Is Bad and the Fellow Is Not Instantly Killed—The Sheriff Then Strangles Him.

South McAlester, Ind. T., Nov. 6. - Silan Lewis, the condemned Choctawa[sic] murderer, was shot at Wilburton this morning by Sheriff Pursely. the bullet from the sheriff's Winchester missed the condemned man's heart, passing through (h)is body, an inch above the nipple. He had to be strangled to end his sufferings. Sheriff Pursely anticipated trouble, having just before the execution received a telegram from Lewis' friends threatening vengeance, and had over 100 armed deputies at the scene. Arrived at the place of execution, Lewis offered up prayer, following it with a short talk. he then pulled off his coat, vest and boots and the sheriff painted a cross just beneath his left nipple. Lewis then sat down and was blindfolded, while two men held his hands. The sheriff retraced his steps five feet and fired. The bullet went clear through the murderer's body, but had missed its mark, and Lewis threw back his head and sank to the ground, the blood spurting from the wound. End the horrible work the sheriff was finally compelled to take hold of the man's nose and smother him to death. He lived three minutes after being shot. Twenty-six other Indians are under indictment for the same murder for which Lewis was executed. When they come to trial trouble is anticipated, as their sympathizers are aroused. Lewis was fifty-four years old. He had been given frequent chances to escape, because of the sheriff's dread of carrying out the law, but refused to take advantage of them. 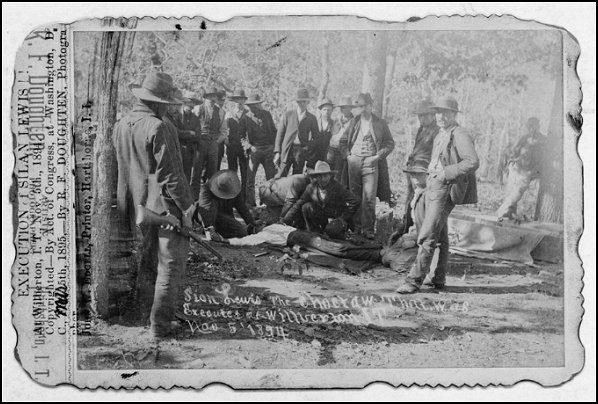 We seldom give thought to seemingly insignificant events and how those events can ripple down through time causing serious impact upon peoples and our society at large. This execution of Silan Lewis proved, in time, to also be the execution of our Choctaw Sixtowns tribe.

Silan Lewis is an old fashion traditional Choctaw faithful to the ways of our elders. Silan fiercely believes in Indian national sovereignty and struggles to have the federal government out of our tribal life. Silan gives his life trying to protect our Choctaw peoples and our old ways.

This is a short version of a story, "Buzzards and Eagles", as told to me by Choctaw Elders. This takes place not too many years after the Trail of Tears death march during which thousands upon thousands of Indians of different tribes are coldly and callously murdered by white Christians and President Andrew Jackson during a freezing Oklahoma winter.

Silan Lewis is a "Nationalist" leader, a group of Choctaw who hold faith in our old ways. Those nationalists are nicknamed, "Buzzards". These nationalist Choctaw oppose giving up our reservation lands through a government plan of "allotment" which is to give each Choctaw family some land, typically 160 acres. This is a federal policy of splitting up our reservation lands into small parcels privately owned by Choctaw families. This is a method of genocide.

An opposing party is the "Progressives" who are nicknamed "Eagles". This group is headed by Chief Wilson Jones. These progressives favor giving up our reservation lands to private ownership, supposedly in the hands of Choctaw families. Chief Jones is a mixed blood Choctaw, and a wealthy cattle rancher. Jones is not a traditional Choctaw.

A tribal leadership election is scheduled with "buzzard" Jacob Jackson, a full blood faithful Choctaw, running against "eagle" Chief Wilson Jones, a mixed blood unfaithful Choctaw. Emotions become inflamed, "buzzards" want to honor our traditional ways and keep our lands, "eagles" want to give up our lands and become assimilated into a white man culture. Some buzzards shoot and kill a handful of eagles. This shooting is traditional and an act to save our tribe and our lands.

Seventeen tribe faithful Choctaw men, buzzards, are charged with murder and stand trial. Silan Lewis is the first to be executed. This killing of Silan Lewis is performed by "Choctaw Lighthorsemen" who are mixed Choctaw and white. Those horsemen are mercenaries who work for Chief Wilson Jones. This is not justice, this is Chief Wilson Jones killing his political opponents using tribal law forced upon tribes by our federal government. 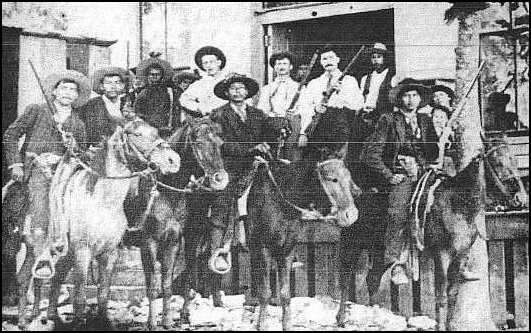 This killing of Silan Lewis is so horrific, as you read in my Minnetonka News quote up top, this is such an abhorrent event, people are shocked into commuting death sentences of the others and this case is abandoned.

Of equal cultural importance, I am taught by my elders of our "blood for blood" tradition. An example serves to have you understand this tradition. A man kills my husband. By tradition, I am entitled to call out this man and do whatever I want to him, including killing him. This man who killed my husband is obligated to appear before me and accept whatever punishment I mead out. This "blood" part comes this way. If someone draws my blood, maybe slices me with a knife, I am entitled to have him stand before me and spill his blood by my hand; blood for blood. This tradition keeps peace between our peoples, this is responsibility and accountability. There is never any crime worth mentioning amongst our peoples until white Christians show up.

Silan Lewis, murdered not executed, is faithful to our traditions. Choctaw, corrupted by Christians, call him out for killing others albeit in an attempt to save our tribe. Silan proudly stands before our tribal council to accept his blood-for-blood justice.

Silan is afforded many chances to escape by a sheriff charged with a responsibility of killing Silan, this lawman does not want to kill Silan. Instead of escaping, Silan remains in custody, never once gives thought to avoiding his responsibility. Silan displays personal strength by lying down in his coffin to make sure his death bed fits him. Silan, just before being killed, bravely says his Choctaw death chant then makes this easy for Sheriff Pursely to kill him. Silan helps Sheriff Pursely prepare him for killing. Silan displays compassion for this man whose responsibility is to shoot and kill Silan.

Ironically tragic, Sheriff Lyman Pursely and Silan Lewis are lifelong best friends, those two know each other since childhood. Lyman must kill his friend, Silan. Lore teaches us Sheriff Pursely tries many times to talk Silan into escaping. This sheriff never locks Silan into his cell, even allows Silan to leave for visiting with his wife and family. Silan Lewis protects his tribal pride and dignity, Silan always returns to his unlocked jail cell.

Day of execution, Sheriff Pursely cannot pull his rifle trigger to kill his friend, Silan. Waiting, blindfolded, Silan understands what is happening, he yells out, "Shoot, Lyman!" I am taught this so startles Sheriff Pursely he jerks at his rifle and misses shooting Silan through his heart. 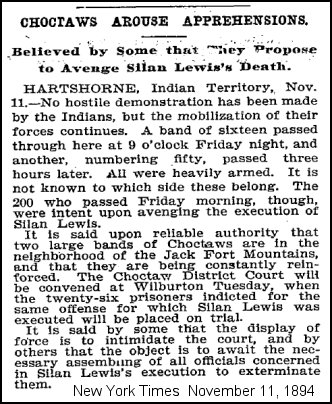 Silan is killed, people are shocked senseless, no more are executed. Silan is the first and last person to be executed under Choctaw tribal law. Our tribe learns from this, our tribe never kills another person in the name of tribal justice.

Time passes, the "eagles" win, and our federal government steals almost two-thirds of our lands given to us after the Trail of Tears death march. As always, white Christians lie to us Indians with intent to exterminate our culture. The feds "allot" small parcels of land to each Choctaw family whose name appears on the Dawes Roll. There is nothing but deceit here.

Those Choctaw who do not register, do not receive any tribal land and keep their children. Those who do register receive land but their children are taken away. In the end, more than two-thirds of our tribal lands end up in federal government hands and given or sold to white Christians.

The feds agree to distribute our lands to Choctaw families. The feds never tell our tribe excess land will be sold to settlers, commercial interests and land developers. The feds know there is more land than Choctaw families. These types of deceitful racist activities happen to all tribes across America. Those white Christians scheme and plan in every way possible to completely exterminate all Indians.

This deceit by white Christians plunges Indians into hopeless poverty for life, and for generations to come, including today's generation of Indians. Christians, with the willing help of our American government, take our lives, take our children, take our lands and take our culture.

We rarely give much thought to little known historical events, until time catches up with us. This time, many decades back, Silan Lewis is executed and, metaphorically, this is the execution of our Choctaw tribe. His death, his brave traditional death because of his being faithful to our traditional ways, his death leads to Choctaw losing all of our tribal lands. Silan Lewis, with pride and dignity, gives his life to try to prevent this loss of our culture.

This story of Silan Lewis is a type of truth taught to me by my elders during my childhood. I honor my elders and my ancestors for their teaching us generational children, truth. These types of truths cause great discomfort for Christians. What Christians fear the most is truth. 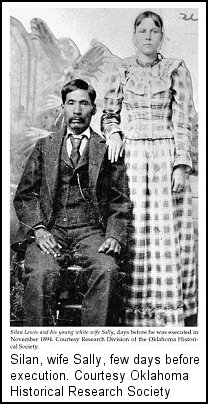