---
The proud spirit of the original owners of these vast prairies inherited through centuries of fierce and bloody wars for their possession, lingered last in the bosom of Sitting Bull. With his fall the nobility of the Redskin is extinguished, and what few are left are a pack of whining curs who lick the hand that smites them. The Whites, by law of conquest, by justice of civilization, are masters of the American continent, and the best safety of the frontier settlements will be secured by the total annihilation of the few remaining Indians. Why not annihilation? Their glory has fled, their spirit broken, their manhood effaced; better that they die than live the miserable wretches that they are. 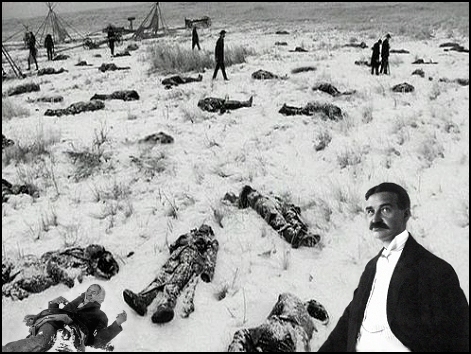 You recognize his name, L. Frank Baum is the author of a most popular story for children, "The Wonderful Wizard of Oz". History notes Baum is a hardcore racist. By today's standards, Baum is a Ku Klux Klan category of racist. Baum plays a critical role in this tragic butchering and slaughtering massacre of American Indians, Wounded Knee.

My quoting of Baum is a passage from a larger racist rant he publishes via his newspaper, "The Aberdeen Saturday Pioneer" located in the then "Dakota Territory". His murderous ravings are driven by the assassination of Sitting Bull, a Hunkpapa Lakota leader, who joined with Cheyenne to soundly defeat the American 7th Cavalry at Little Bighorn. Sitting Bull is murdered by "Indian Agency Police" operated by the American government. Ironically, Sitting Bull is killed on the Standing Rock reservation which is a fierce flashpoint for protests today.

Lyman Baum whips up peoples of the plains, our military and government into a racist killing frenzy. Baum, this Wizard of Cause, is a driving force for a horrifying massacre, Wounded Knee, which today is sacred ground and sacred symbolism of those centuries of misery, suffering and terrifying death inflicted by white Christians upon tens of millions of our peoples. 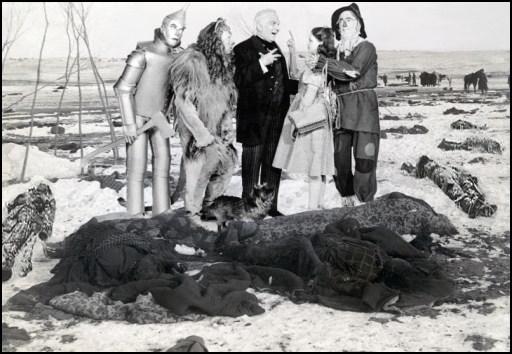 ---
The difficult Indian problem cannot be solved permanently at this end of the line. It requires the fulfillment of Congress of the treaty obligations that the Indians were entreated and coerced into signing. They signed away a valuable portion of their reservation, and it is now occupied by white people, for which they have received nothing.

They understood that ample provision would be made for their support; instead, their supplies have been reduced, and much of the time they have been living on half and two-thirds rations. Their crops, as well as the crops of the white people, for two years have been almost total failures.

The dissatisfaction is wide spread, especially among the Sioux, while the Cheyennes have been on the verge of starvation, and were forced to commit depredations to sustain life. These facts are beyond question, and the evidence is positive and sustained by thousands of witnesses.
--- 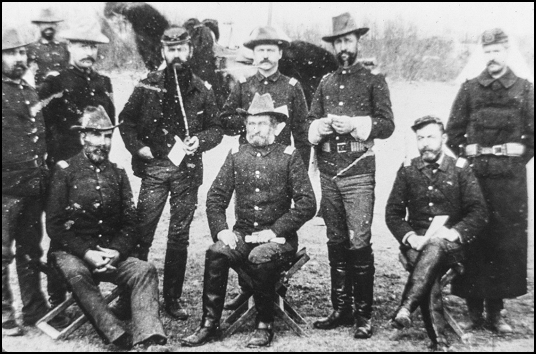 Down in a valley are a couple hundred elderly Sioux men, a handful of young men and more than a hundred Sioux mothers, children, toddlers and infants. All are starving to death, all are freezing to death, none can put up a fight nor want to fight.

At dawn, December 29, 1890 Colonel James Forsyth sends a detachment into the Sioux encampment to seize rifles. Less than forty rifles are found. Soldiers approach an elderly Sioux, Black Coyote, and order him to release his rifle. Black Coyote is deaf, he cannot hear what soldiers are saying. Sioux men with Black Coyote tell those soldiers many times he is deaf and does not understand what they are saying. Several soldiers attack Black Coyote, his rifle fires one shot into air.

On high ground, military commanders instantly issue orders to open fire. Rifle bullets rip apart the encampment, Hotchkiss cannon rounds explode all around. A few Sioux try to return fire but are mowed down. Those elderly Sioux men, mothers and children are killed. American soldiers in this encampment are also shot and killed by their own fellow soldiers up on high ground.

This is important to note soldiers in this encampment to collect rifles are intentionally killed by American soldiers up there on high ground. This is indiscriminate slaughtering. Dogs are shot, horses are shot, anything which moves is shot down.

A couple dozen Sioux mothers carrying infants, their children and few elderly men scatter and run across the plains. Cavalry horsemen charge in and chase after those defenseless Sioux, chase after them for miles. Our American soldiers shoot those women and children in their backs, in their heads, all are killed.

An Indian girl said to be five or six years old steps out of a tepee waving a flag white. She gets out there four or five steps and cavalry soldiers literally blow off her head. Over edge of encampment a dozen or so Sioux children are hiding behind an embankment. Soldiers tell them to come out from hiding, tell those children they are safe and will not be harmed. Those children walk out and our American soldiers shoot and kill every child. When this morally repugnant killing is done, only about fifty Sioux survive, three or four men, the rest mothers and children.

Our proud 7th cavalry suffers a couple dozen soldiers killed and another forty or so wounded. Virtually all of those soldiers are shot and killed or wounded by their own fellow soldiers. A small handful, five or six are killed or injured by Sioux. 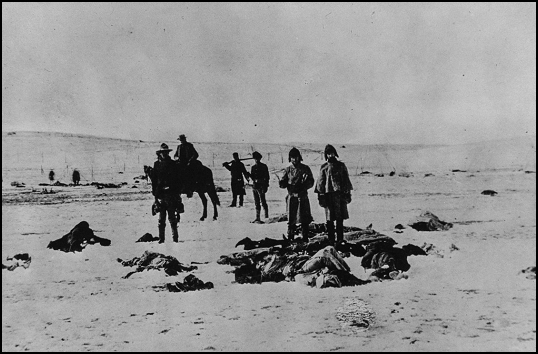 Captain Edward Godfrey of the 7th Cavalry makes a feeble attempt to cover-up this massacre in his report:

---
I know the men did not aim deliberately and they were greatly excited. I don't believe they saw their sights. They fired rapidly but it seemed to me only a few seconds till there was not a living thing before us; warriors, squaws, children, ponies, and dogs ... went down before that unaimed fire.
--- Old Sioux men, mothers, children and infants are thrown down in a trench then frozen dirt shoveled on top of them as if those Sioux are nothing more than dead dogs. 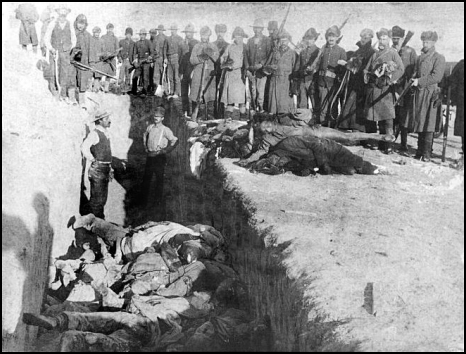 Only a week later, to keep those fires of hatred and death of white Christians fiercely burning, Lyman Frank Baum writes another editorial for his New Year January 3 edition of the Aberdeen Saturday Pioneer:

---
The peculiar policy of the government in employing so weak and vacillating a person as General Miles to look after the uneasy Indians, has resulted in a terrible loss of blood to our soldiers, and a battle which, at its best, is a disgrace to the war department. There has been plenty of time for prompt and decisive measures, the employment of which would have prevented this disaster.

The Pioneer has before declared that our only safety depends upon the total extirmination [sic] of the Indians. Having wronged them for centuries we had better, in order to protect our civilization, follow it up by one more wrong and wipe these untamed and untamable creatures from the face of the earth. In this lies future safety for our settlers and the soldiers who are under incompetent commands. Otherwise, we may expect future years to be as full of trouble with the redskins as those have been in the past.

An eastern contemporary, with a grain of wisdom in its wit, says that "when the whites win a fight, it is a victory, and when the Indians win it, it is a massacre."
---

Lyman Frank Baum, author of "The Wonderful Wizard of Oz", is the man hidden behind a blood stained green curtain. He is the Wizard of Cause of the Wounded Knee massacre.